The Anti-Corruption Commission (ACC) has filed a second indictment against Stephen Yayah Mansaray, former Master and Registrar of the High Court of Sierra Leone; Richie Edwin Asgil, former Principal Accountant in the Judiciary; Adele Faya, former Account Clerk of the Judiciary; and Clarence Solomon Will, a Legal Assistant at a Law Firm in Freetown.

According to the ACC, Stephen Yayah Mansaray and Richie Edwin Asgil were the signatories to the Judiciary’s Master and Registrar’s account domiciled at the Bank of Sierra Leone.

A press release by the ACC states that on diverse dates, between June 2014 and May 2018, both accused men, conspired with others to sign a number of cheques through which they authorized the withdrawal of funds from the aforementioned account for their personal benefit or for other unjustified purposes.

“Similarly, Adele Faya, former Account Clerk of the Judiciary, also instructed the encashment of various cheques from the same account, and misappropriated these monies,” the ACC release stated.

The ACC release further stated that Clarence Solomon Will, a Legal Assistant at Bah & Co., a law firm in Freetown, on diverse dates between 25th April, 2018, and 14th March, 2019, conspired with unknown persons, to misappropriate public funds by illegally facilitating the encashment of cheques from the Judiciary’s account.

“All four accused persons misappropriated the total sum of Four Hundred and Sixty Million, Two Hundred and Sixty-Eight Thousand, and Two Hundred Leones (Le460, 268,200/00) from the Judiciary’s Master & Registrar Account domiciled at the Bank of Sierra Leone,” the release stated. 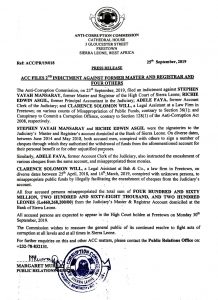 All accused persons are expected to appear in the High Court holden at Freetown on Monday 30th September, 2019.