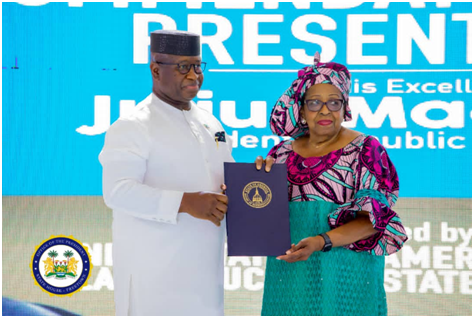 President Julius Maada Bio has, on the 20th October, 2022, unveiled the Special Edition of the African Leadership Magazine, telling the story of his leadership and legacy in Sierra Leone that earned him the lifetime of service award from the United States of America National Bar Association. The unveiling took place at the Freetown International Conference Centre.

The award was conferred on him by the immediate past President of the National Bar Association, Judge Carlos Moore, during his tenure in July 2022.

The President was also presented the Congressional Commendation Award by the President-elect of the National Black Caucus of State Legislators of the USA, Representative Laura Hall, during the magazine unveiling ceremony in Freetown.

In his acceptance address, President Bio said theirs was a beautiful story to tell by the African Leadership Magazine team and thanked development partners and all other stakeholders involved in piecing together the story of Sierra Leone’s growth in the last four years.

“As the unveiling ceremony commemorates our four and half years in governance and celebrates my leadership and legacy, the biblical scripture of Luke 12:48 lingers on my mind – ‘to whom much is given, much will be required’. So, I accept this award with deep gratitude, giving all praise and thanks to the Lord, who has been my Source and Sustainer throughout my life’s journey.

“I accept this Lifetime of Service and Achievement Award and Recognition with great humility but with deep reflection on a past of dreams lost and optimism about a future of great promise,” he said, noting that the award was a testament to Sierra Leone’s resilience and splendour and its hardworking citizens’ perseverance to build a country that could stand with pride among nations.

He paid tribute to the team in his Government saying that who is a leader without a team of brilliant and dedicated individuals, equally committed to a vision of a prosperous, just and safe nation.

“I am blessed to have a Government that breathes life into each aspect of our vision – from my dedicated Vice President to all of the Cabinet Ministers and their staff. This award and recognition are for you. I recognize all those at all levels of Government – the Executive, Legislature and Judiciary, who play their role in ensuring we can make life better for each citizen,” he concluded.

The African Leadership magazine is published by African Leadership (UK) Limited and focuses on bringing the best of Africa to a global audience, telling the African story from an African perspective; while evolving solutions to peculiar challenges being faced by the continent today. It promotes innovation, entrepreneurship and development in Africa and aspires to become the undisputed vehicle of first choice in showcasing the continent’s continual growth in the critical sectors of international development.