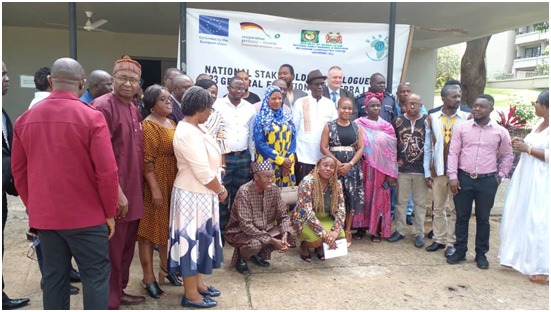 The West African Network for Peace Building (WANEP) and the National Early Warning and Response Mechanism Coordination on 20th October 2022 ended a day’s dialogue at the Radisson Blu, Mammy Yoko Hotel against the backdrop of engaging stakeholders within the democratic space on conversations on national issues as Sierra Leone prepares for another multitier elections in June 2023.

The consultative dialogue was on Sierra Leone’s democracy in preparation for the 2023 general elections.

Formally opening the session, Kadi Jumu Peters, UNDP Team Lead on Governance noted that the UNDP supports elections processes all over the world noting that Sierra Leone is one of the countries that enjoy such support and also supports Civil Society Organisations and the media through capacity-building.

Madam Jumu Peters also commended WANEP for always taking the lead in such dialogues stating that it has always been a difficult challenge to achieve free, fair and credible elections but observed that national dialogue sessions provide an inclusive platform whereby people are able to participate and make relevant contributions whilst calling on WANEP to organize more of such dialogue sessions.

The UNDP Team Lead on Governance furthered that such dialogue sessions can address issues of national concerns, political protests and insurrections.

Christian Widmann, GIZ Regional Director for Sierra Leone, Liberia and Guinea said the dialogue is timely as Sierra Leone prepares for the June 2023 general elections and affirmed that discussions around such a process are very crucial considering the fact that most conflicts in the sub-region are as a result of elections noting that GIZ, like the European Union, puts premium on democracy and therefore supports such a process.

Widmann said he was encouraged by the preparation of stakeholders so far ahead of the elections and hoped that the outcome would be accepted by all parties.

Chief of Staff, Office of National Security (ONS), Francis Langoba Keili underscored that such dialogues put the institution in a better position to respond to issues of national security, proffered that the ONS partners with WANEP to provide early warning signals reiterating that such partnership spans more than a decade.

Keili said with support from Irish Aid and the Institute for Governance Reform, the ONS was able to conduct a threat assessment which addresses all the issues being raised and called on stakeholders to come out with a comprehensive document that would speak on all the issues noting that as the elections approach, the ONS would have to make use of all the security sector appendages to enhance its mandate, the reason they heavily depend on such meetings.

Abubakarr Koroma, Regional Commissioner, North, Electoral Commission of Sierra Leone (ECSL) said the meeting should ensure that the benchmarks for a peaceful elections are established adding that elections can contribute to peace but can also be  a recipe for chaos and that the ECSL acknowledges WANEP’s role  for organizing such a dialogue  as the ECSL is working to pursue its electoral education with women’s groups,

Olusheed A. David, Executive Secretary of the Political Parties Registration Commission (PPRC) said the PPRC 2002 Act looks obsolete as it does not speak on the current issues, the reason they have put before Parliament a Bill that is more progressive stating that the Commission has been engaged in capacity building for the various political actors.

He said the causes of most conflicts within political parties is the communication gap between members and their followers but noted the PPRC would always remind political parties about their role to their supporters.