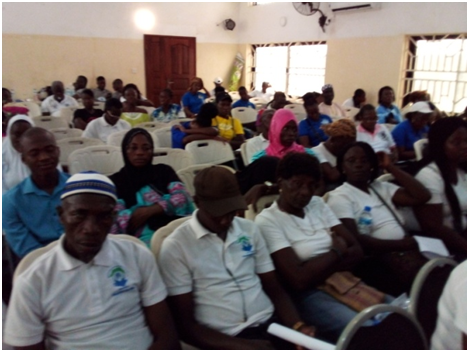 Ralph Ansumana, Director of Other Financial Institutions, Bank of Sierra Leone, deputizing the Deputy Governor of the Bank, Financial Stability, Sheikh A. Y. Sesay, on Thursday 20th October 2022 stated that the bank recognizes the crucial role of Credit Unions (CUs) to reach out to the unbanked who would otherwise not have access to financial services underscoring that CUs have a lot of potentials to benefit their members including financial literacy and independence.

He made the statement in his keynote address to observe this year’s 74th International Credit Union Day (ICUD) on the theme, ‘Empower Your Financial Future with a Credit Union’ at the D Bim D Bam Hall on 85 Wellington Street in Freetown.

The ceremony was organized by the Irish League of Credit Union Federation (ILCUF) Limited, in collaboration with the National Cooperative Credit Union Association-Sierra Leone (NaCCUA-SL).

Ralph Ansumana further revealed that CUs encourage members to save for future development, that the bank would ensure the safety of members’ deposits and affirmed that credit unions and NaCCUA have been included as stakeholders in the implementation of the National Strategy for Financial inclusion 2022-2026.

According to Ralph Ansumana, due to the importance of CUs to the bank, they now participate in all CU activities both at home and abroad, that BSL is part of the Credit Union Steering Committee which oversees the operation of credit unions in the country and participated in the development of the CU Rule Book. He also informed CU leaders and staff that BSL expects them to take full responsibility in managing members’ deposits so that no single member loses his/her deposit. He informed members present that the Bank Governor is a member of credit union. The Deputy Governor is also a member of the World Bank. The bank would love to see all Sierra Leoneans including institutions joining credit unions. They are planning of establishing a credit union for staff of the Bank of Sierra Leone.

The Senior Permanent Secretary in the Ministry of Trade and Industry, David Banya, who deputized the Minister, asserted that the Ministry is proud to associate with CUs as they are registered with the Department of Cooperatives, that CUs have brought financial management and services to the people as it is simple to join, that, unlike banks, CUs have a lot of benefits and affirmed that the Ministry would ensure that they become credible and dependable.

According to Mr. Banya, the Ministry would live by example by staff joining CUs and commended ILCUF, the Bank of Sierra Leone and NaCCUA for their invaluable support to CUs in the country.

The Irish Ambassador in Sierra Leone, Claire Bucklyn revealed that she has been a member of the CU for 20 years, that CUs mean equality, people first, financial inclusion and literacy, facilitating access to finance, that Canada and the United States used to help Irish Credit Unions as they are now doing in Sierra Leone, asserted that CUs empower people, commended all stakeholders for enacting the Credit Union Rulebook and congratulated CU members, ILCUF and NACCUA.

In his statement, the General Manager of ILCUF, Solomon Mwongyere enlightened that ILCUF is using the CU model to promote financial inclusion, which helps to reduce poverty and boost prosperity adding that the day is to celebrate the successes CU members have derived from the services and products offered to them.

He went on to state that through CUs, members have been able to send their children to schools and colleges, improve their farms, start businesses, build houses and create employment informing that CUs are employing directly 60 staff and commended the Government of Sierra Leone for creating the enabling environment for CUs to thrive, the Ministry of Trade and Industry for enacting the Cooperative Policy as well as regular guidance and support accorded to the CU movement.

The Chairman of the National Cooperative Credit Union Association-Sierra Leone (NaCCUA-SL), Ibrahim Sorie Bangura, articulated that CUs are not-for-profit financial cooperatives, not for charity but for services that provide an effective and viable alternative for-profit financial institutions with more than 291 million members worldwide in 118 countries disclosing that there are more than 86,000 CUs globally providing financial services for their members that have been recognized as a force for positive economic and social change.

International Credit Union Day (ICUD) has been celebrated on the third Thursday of October since 1948.

ICUD is to celebrate the spirit of the global Credit Union (CU) movement, recognize and reflect upon the CU movement’s history, promote its achievements, recognize hard work and share members’ experiences.

ICUD has been celebrated in Sierra Leone since 2016 but due to the COVID pandemic it was not observed for two consecutive years.

Highlights of the colorful event were the float parade of various CUs members and students of the Bayconfields Cooperative Society from Youyi Building to Wellington Street, led by the Sierra Leone Police Band and the Collegiate School Band, screening of a video of the impact of CUs on members, entertainment skit by students of the Bayconfields Cooperative Society, singing of the CU song and musical performance.

Le 57m Worth Of Covid-19 Items Provided by credit Unions