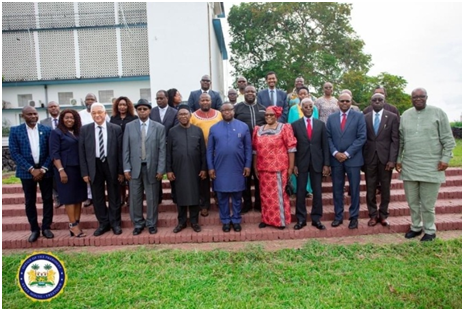 Welcoming the delegation, who had spent a successful two-day technical training workshop on the continental monitoring, evaluation and reporting framework for member States in Freetown, Minister of Political and Public Affairs, Ambassador Foday Yumkella, serving as the Chairman of the Steering Committee and focal person, expressed gratitude to the President for graciously approving the hosting of the Congress of Panel of Eminent Persons in Sierra Leone.

He said the panel was at the presidency to brief President Bio about the outcome of the meeting.

Chief Executive Officer of the APRM Continental Secretariat, Professor Eddy Maloka, expressed appreciation to President Bio for the warm reception accorded them and described as amazing his speech to the extraordinary summit of the African Union (AU) on terrorism and unconstitutional changes of Government in Malabo, Equatorial Guinea, that was well-received by other member countries.

He urged that: “Your Excellency sir, I want to kindly request that APRM Committees be established in the different countries so as to achieve APRM’s latest strategy of 2020-2023 to continue its drive for universal accession”, where all AU member States voluntarily accede.

He further suggested that an appointment of a special envoy, who would visit and talk to countries yet to be members of the APRM, would be of great advantage. Of the 55 AU member States, more than two-thirds have already acceded to the APRM.

In his brief remarks, President Julius Maada Bio said that he was happy to be selected to serve as Chairperson of the African Peer Review Forum of Heads of State and Government by his colleagues, noting that it was a great initiative. He promised, therefore, to serve with humility and pride, adding that he was also happy to receive the team at State House.

The President urged all to use democracy to keep society peaceful because peace is important for development. He encouraged the visiting eminent persons to continue to take the APRM seriously, adding that he is counting on their support to make the APRM more vibrant.