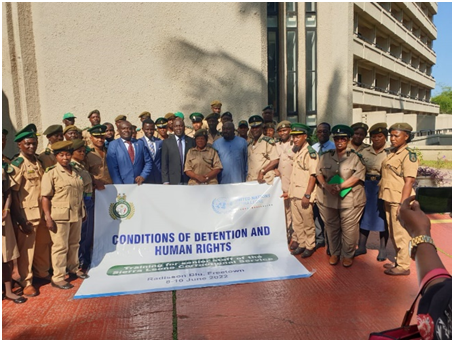 The United Nations Resident Coordinator, Babatunde Ahonsi, has encouraged senior-level staff of the Sierra Leone Correctional Services (SLCS) to reflect on the conditions of detention and the complaint mechanisms available for the detainees in Correctional Centres across the country.

Babatunde Ahonsi made the call at the Radisson Blu Hotel in Freetown last Wednesday at the opening of a three-day training for senior-level staff of the SLCS on Conditions of Detention and Human Rights.

The Resident Coordinator said that during his various engagements with the highest authorities of the country, including the office of the Vice-President, the need for the UN to support the capacity building of the staff of the SLCS often emerged.

He therefore described the training as timely and hoped that it would contribute to staff development and the reform of the correctional services that the Government is undertaking.

According to him, “the programme of the training is adequate as is the calibre of the facilitators involved, from the SLCS, the UN, the Human Rights Commission of SL, the Legal Aid Board and civil society organizations”. He noted that participants would also discuss issues including the rights of persons deprived of liberty, roles, and responsibilities of correctional officers, security and management of correctional centres.

The RC underscored the UN’s belief that all people regardless of their backgrounds have rights and responsibilities to fulfill their potential in life and lead decent, dignified and rewarding lives in a healthy environment.

“None should be left behind in this journey to achieve the 2030 Agenda for Sustainable Development,” said Ahonsi, adding that the training will contribute to the achievement of various sustainable development goals (SDGs), specifically SDG 16- promote peaceful and inclusive societies for sustainable development, provide access to justice for all, and build effective, accountable and inclusive institutions at all levels.

In his welcome remarks, Acting SLSC Director-General, Ahmed Turay, said he was deeply honoured that 30 senior officers of the SLCS were partaking in the training. He said such would strengthen the knowledge and skills of officers to perform their duties with the human rights of inmates in mind.

The Acting DG said the SLCS Act of 2014 lays a premium on the recognition of the rights of inmates irrespective of the crimes they have committed. Noting that human rights are directly reflected in the SLSC’s mission statement, he assured partners that the Correctional Service is willing, ready, and able to utilize the training opportunity as it will enhance his officers’ ability to effectively and efficiently manage correctional facilities.

Delivering the keynote address on behalf of the Vice President of Sierra Leone, Dr Mohamed Juldeh Jalloh, Minister of Internal Affairs, David Maurice Panda-Noah said that it was fitting that such training is organized for Correctional Officers to remind them once more that they are under obligation to uphold human rights principles, especially in the dispensation of their duties.

Minister Panda-Noah underscored the importance of Human Rights for Correctional Officers when one takes into consideration the value it will add to the SLCS and the country. “It will provide them with the psychological tools, the requisite knowledge and skills, and the right attitude to perform their duties in accordance with national and international laws on the treatment of persons deprived of their liberty,” he emphasized.

United Nations Country Team in Sierra Leone Senior Human Rights Advisor, Christian Mukosa, said the training aims to enhance the knowledge and skills of senior staff of the SLCS on the rights of the detainees with a focus on prisoners with specific needs, including women, juveniles, persons with disabilities and foreigners. He added that participants would discuss and produce an action plan to implement the various human rights principles and recommendations from the training during the three days.

Over the next three days, senior-level Corrections Officers will be exposed to human rights principles of good prison management, prohibition of torture and other cruel, inhumane, or degrading treatment or punishment, women in detention, and prevention of gender-based violence in correctional settings and pre-trial prisoners and legal assistance to persons in detention among others. 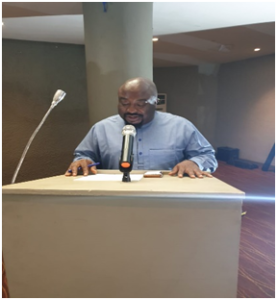 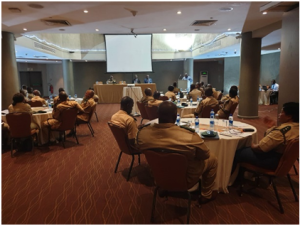