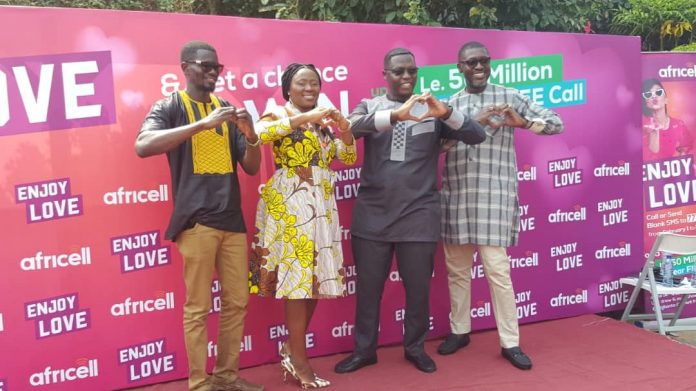 The country’s leading GSM mobile operator Africell has on Friday 31st January, 2020 launched the “ENJOY LOVE” 2020 Valentine Promotion at the company Headquarters on Wilberforce in Freetown.

In his address, Chief Corporate Affairs Officer of Africell, Joe Abass Bangura, disclosed that the legend on how February 14 came to be an annual commemoration of the celebration of love and affection between intimate companions, has it that a priest named Saint Valentine, lived in Rome during the third century, during the reign of an Emperor named Claudius whom many people disliked. He narrated that the story goes on that Claudius was having trouble getting men to serve in his army. He felt many men would not volunteer to join the army because they did not want to leave their wives and families and he thought that if men were not married, they would join the army. So, Claudius passed a new law banning any more marriages.

Most people thought this law was cruel and Valentine, the Priest, continued to organize secret marriages for couples. One night he was caught, thrown into jail and told he would be put to death.

“Many young people came to visit Valentine throwing flowers and cards into his jail cell. One regular visitor was said to be the daughter of the prison guard. On the day of his death Valentine wrote a note to the young girl signed “Love from your Valentine”. Some say this started the custom of exchanging love messages on Valentine’s Day,” he maintained.

Joe Abass noted that Love is arguably the strongest of human emotions and to keep this tradition going, Africell is pleased to launch its 2020 Valentine promotion to share the Spirit of Valentine: giving Africell subscribers the opportunity to demonstrate their love for family members and friends during this period along with a chance to also win attractive prizes.

Underscoring the details of the promotion he said that from 1st to 16th February 2020, Africell Subscribers can participate by sending a blank SMS/CALL to 777 for Le.650 and get Le 650 bonus back to be used before 12 midnight for a chance to win attractive prizes on the 14th, 15th and 16th February 2020.

He maintained that the 16th will be the climax of the show as Africell will host a musical concert for kids and older folks and there will be bouncing castles and other playground stuffs for kids with ice cream and popcorn.

He said couples will have to win prizes in the evening segment as well as get a treat from Africell “Be a Star’ contestants and artists and the show will be aired live on AYV television as well as AfriRadio simulcast on all major radio stations nationwide and on Facebook on Friday 14th and Saturday 15th from 8.00pm-8.30pm and on Sunday 16th February 2020, the show be held at the Gigibonta Car Park from 2:00pm to 12:00 midnight.

He said that every weekday from Mon 3rd –Feb to 14th Feb, 5 Lucky subscribers will win free calls to loved ones till the end of the year and  draws will be held on AfriRadio from 5:00 – 5:30pm.

He noted that on the 16th February 2020 ,which will be the climax, when there will be a 10 winners will win 1 year free on-net call till the end of the year (winners will be asked to provide Africell numbers which they will be calling for free) and 2 subscribers will win Le 15,000,000 cash.

“Winners and members of the Media are reminded of the provisions of the Finance Act 2017 that all lottery winnings from Le 500,000 to Le 10,000,000 are subject to Lottery tax of 10% and above Le10,000,000 the Lottery Tax is 20%. Africell will deduct this tax from all winnings in this category for onward payment to the National Revenue Authority (NRA),” he informed.

On behalf of Africell he extended congratulation in advance to the winners of their 2020 Valentine Promotion and called on subscribers to continue to count on their innovative and creative promotions which are all aimed at improving the lives of their cherished Subscribers.