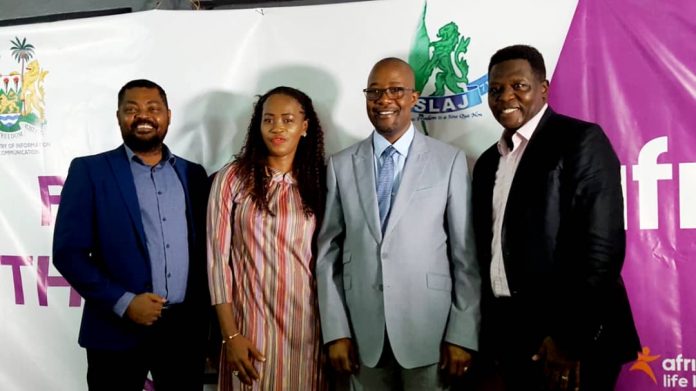 In a bid to give continued support to the media in the country and facilitate the transition of accessing news from a paper based platform to a digitalized one, Sierra Leone’s leading telecommunications company in the country, Africell, has on the 17 March 2020 launched a Free Web Hosting Support Package for print media houses with existing websites in the country. The event took place at the Sierra Leone Association of Journalists Conference Hall on Campbell Street in Freetown.

In his address, Minister of Information and Communications, Hon. Mohamed Rahman Swarray expressed appreciation to Africell for the tremendous support the company had been giving to the media and their strides to support the transition from paper based to digital, adding that as a Government they are very interested in leaving behind a digitalized society and to see a country where citizens are competitively participating in the digital economy underscoring that moving from accessing news from a  paper based platform to a digitalized one is part of the move.

He noted that as a country they have realized that 46 percent of the population is made up of young people stating that is why Governments all around the world are investing in young people.

He urged media practitioners to take advantage of the opportunity revealing how some media houses in the country do not have over two thousand US dollars to pay in order to host websites underscoring that with such a move will definitely enhance the growth of the media.

He disclosed that as a Government they are very concern about what will be hosted online, adding that it is no secret that journalists all over the world hold Government officials accountable but said as the media undergoes a transition from paper base to digital they should be professional in their jobs.

He called on other telecommunications service providers in the country to emulate the foot step of Africell in supporting the media.

Chief Corporate Officer of Africell SL, Joe Abass Bangura, disclosed that Africell has over the years kept a solid and growing relationship with the media in Sierra Leone and that is evident in the support they have been providing in both technical and financial forms, adding that presently, they are supporting over 20 radio stations in the country in the form of collocation and cash for fuel subsidy saying the stations are 9 in Freetown, 3 in Bo, 1 in Daru, 1 in Moyamba, 2 in Kono, 1 in Kenemna, 2 in Kabala, 1 Makeni, 1 in Pujehun and 1 In Magburaka. He disclosed how they have been providing this support to these radio stations for a period spanning from 3 years for some to over 10 years.

He said to ensure equity in Africell’s support to the media, they recognized it was time to look at areas of potential intervention in the Print Media space and they got their Media Manager, John Konteh, to conduct a survey on social media, covering three questions; the result of which has prompted the reason why they are launching the package.
He said the sample size of the survey was quite small and may have been skewed towards the younger generation who are tech and internet savvy, noting that 90% of the respondents said their primary source of news is the internet and less than 10% said hard copies of newspapers and that from the 32 respondents; 24 were male and 8 were female; 56% had not bought a newspaper for more than a year.

“Additionally, according to the “We are Social Digital” report for January 2020, 25% percent of Sierra Leoneans now have access to the internet, which show a leap in penetration from 12% in the previous year, a more than 100% growth rate.
We believe part of the message here for the Print Media is that to ensure your business is sustainable and can grow in the future, you have to tweak your business model to seek ways of publishing online and design relevant revenue streams,” he maintained.

He said they want to support in that direction and as a partner they have always been to the media and in that regard they are pleased to announce the launch of a FREE WEB HOSTING SUPPORT PACKAGE to every newspaper in the country with an existing website, adding that this offer will effectively eliminate the web-hosting operational cost incurred by newspapers yearly and allow them to use these funds for other budgetary expenses.
“In exchange for this, all Africell would be requesting is the negotiation of a discounted rate for adverts and an advert at the bottom right of your web pages to indicate that your website is hosted by Africell. We hope this will further help members of the print media to explore the new business model frontiers that online publications of your newspapers provide,” he intimated.

Social media penetration in Sierra Leone stood at 8.9% in January 2020.

He said in the future there will be more social media journalists. The SLAJ President commended Africell for the good step they have taken to help the media get internet coverage and help the new media to become active as well as to explore the new business model frontiers that online publications reach. He further encouraged the media to take the opportunity serious saying it will help spread the news all over the world that people could just go online and read their publications.