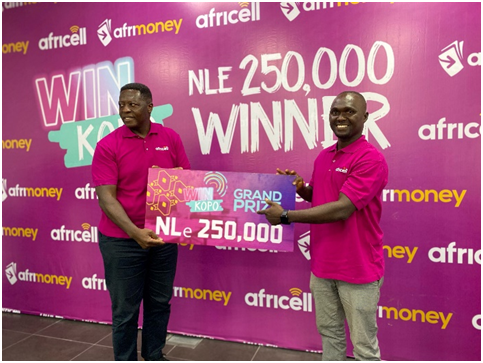 During a Press Conference held on Wednesday 2nd November, 2022 at Africell’s Headquarters on Wilberforce in Freetown, one of Sierra Leone’s biggest and finest GSM operator in the country, Africell Sierra Leone has presented the sum of NLe 250,000 equivalent to Le 250,000,000 Old Leones to Mohamed Sesay as the first prize winner in their ongoing “Win Kopo” Promotion tagged: ‘NA U TEM DIS, Yu sef Kin win with WIN KOPO.’

Speaking on the “Win Kopo” promotion, the Media Manager at Africell Sierra Leone, John Konteh, stated that the promotion has daily, weekly and monthly draws, adding that points are calculated from every recharge done by subscribers before midnight the same day and that the more subscribers recharge, the more chances they have in the daily draw of which he said a daily electronic draw is done to select a lucky winner of NLe 250 for the daily draw.

He said that the second part is the SMS trivia, where questions are posed via SMS and for subscribers to participate, they need to Dial *4888# or send START to 4888 from an Africell line for NLe 0.80 or 80 cents daily, furthering that winners from the SMS trivia will be announced weekly and monthly; the grand prize winner will be announced every 6 months.

In closing, he said that Africell will like to remind their loyal subscribers, that the only number that will call them during their promotions is 077 777 777 and encourage subscribers not to respond to calls from numbers claiming to be representatives of Africell.

Joe Abass Bangura noted that the lottery laws of Sierra Leone make provision for a stipulated percentage to be deducted from every cash prize won. An amount will be deducted from the total won by Mohamed and that the money will be paid to him on his Afrimoney account.

“It can be your time too, recharge more today or dial *4888# or send START to 4888, on behalf of the Management and Staff of Africell Sierra Leone congratulations once more Mohamed. Na U Tem Dis!” he concluded.

Mohamed Sesay, a commercial driver who won the promotion said he has been with Africell from the time they started operation to date and he has never won until yesterday after recharging several times.

Mohamed described his winning as a total turnaround for him and his family as they will continue the structure they have started at Waterloo among others.

He thanked Africell for the promotion and promised to be an Ambassador for them.