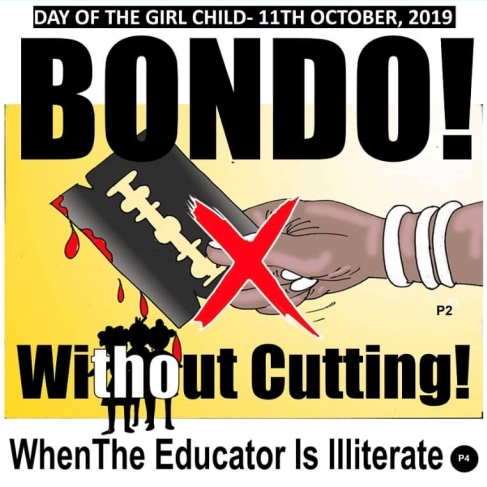 The Amazonian Initiative Movement (AIM) is doggedly poised to transform the traditional Bondo Society in order to maintain our culture and tradition, but is calling for the elimination of  the ‘harmful’ act of cutting.

In partnership with Purposeful, AIM is implementing a pilot project on the first alternative rite of passage in Sierra Leone commencing in December 2019.

The organization, working in five Northern districts of Port Loko, Karena, Bombali, Tonkolili and Koinadugu, has trained Soweis in Port Loko district and has had three public declarations of Soweis to stop the practice of Female Genital Mutilation (FGM). The Soweis have handed in their working instruments, including their head ties in return for blue and yellow head ties as a sign to show that they are Soweis but are not practicing FGM anymore.

The Soweis are sent to adult literacy school to learn the basics; how to write and spell their names; and they are also empowered with basic skills in agriculture. The aim is to replace their livelihood and to train them to conduct the Bondo without any harm to initiates.

“I want people to know that I am part of the Bondo society and I like it so much but I hate FGM because of my experience and that of other women and children which I witnessed. We still have the highest infant mortality rate in the world but yet we are afraid to talk about FGM. If we don’t talk about FGM it will be difficult as a country to address infant mortality because one of the things promoting that is FGM,” said AIM’s Founder and Director, Rugiatu Neneh Turay.

According to AIM, Sierra Leone has more Bondo bushes than schools, hospitals,’Igbalehs’ and ‘Gbanikas’ and the North and North-West practice the worst form of FGM.

“Every village in this country has a Bondo bush and in the northern part, you have what we called ‘Yanka’ where women are still taking about two to three years inside with girls. All those years inside there they are not attending school. So If any Government is talking about promoting education, the focus should be more in the rural communities than in the urban towns,” noted Rugiatu.

Rural women and girls are the ones suffering the most, according to AIM. Most people that are educated hardly involve their children but they are the ones sponsoring the construction of Bondo bushes. It is difficult to find a politician in the North that is sponsoring the building of Bondo bushes but in the South and East, politicians have been bankrolling their construction, it also claims.

“We want politicians to stop the act of constructing Bondo bushes because they are not doing same for the Poro society. They are taking advantage of the high illiteracy rate among rural women to promote what will always put them at the back. We must put a stop to this,” Rugiatu appealed.

The organization has received 150 girls for training, but they are going to be properly scrutinized to ensure children below age 18 are excluded.

“The Bondo society is for women, not children,” Rugiatu emphasized. “We are not accepting anyone that is below the age of 18. We want people to see and admire them and that is the value we want to bring back.”

Within the same project, they will also be trained on the use of signs and language. Unlike male secret societies such as Ojeh, the organization has realized that members of the Bondo society have degrading ways of verifying if one is a member.

“So we have decided that inside the bush, we will develop language and signs. Those that have gone through the practice should be part of the training to understand the signs and language. We need to stop degrading ourselves when we meet at the Bondo bush,” said Rugiatu.

Furthermore, AIM is implementing a project called ‘Replacing the Bondo bush with schools’; working with children and communities that have agreed to replace their Bondo bushes with schools.

The organization believes this will help them monitor the Bondo bushes and ensure no cutting takes place.

“If we do not start to protect our children at this age for them to know that they are being trained into womanhood through our culture, they will think that everything about a woman is pain. The Bondo society is an institution where we meet and interact irrespective of our political alliances, educational background and status. When we are in the society we are all the same and so we want to ensure we bring back the good things that have been eroded,” said Rugiatu.

She added: The focus for now is to stop the cutting but we want to make sure we bring the good things back and we are ready to do so this December 2019. We are calling on everyone to see the need to join the campaign to maintain Bondo without FGM. Bondo is our culture and it is my identity as a Sierra Leonean woman but the trouble in there which is not good hygienically is what we are trying to address.”