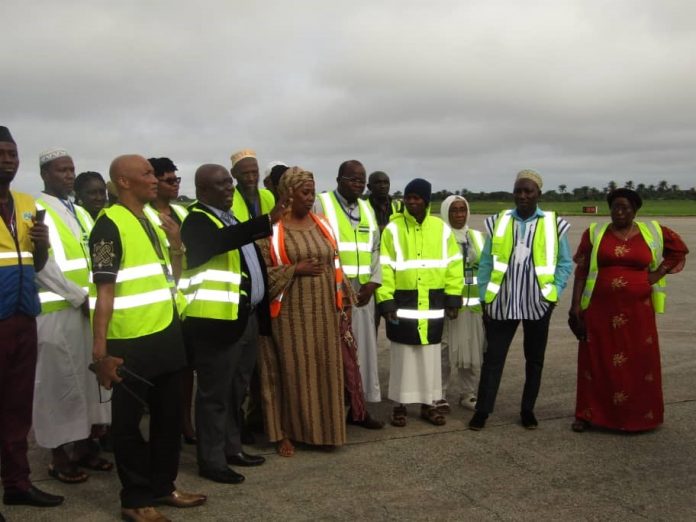 In a very appreciative mood, Baindu Dansama-Kamara, Minister of Social Welfare, Gender and Children’s Affairs showered praises on the Management of the Sierra Leone Airports Authority for a seamless facilitation of the 2019 Hajj movement to and from the Holy Land of Mecca.

Speaking on behalf of the National Hajj Committee, the Minister lauded the smooth passage of pilgrims through the country’s main international gateway, Lungi International Airport without any cause of complaint as had been the case in previous years.

She observed that the Airport Management was able to provide a very robust operational plan which was implemented thus making it possible to attain a smooth departure and entry of over 900 Sierra Leonean pilgrims.

She further encouraged the Airport Management to maintain the standard of performance and continually upgrade it in a bid to mitigating unforeseen challenges in coming years.  “Even before my appointment to serve as a Minister of Government, I have been witnessing the impediment that pilgrims were faced with especially going through the rigors of air transportation, but because the SLAA have placed premium in their area of operations we have been able to maintain a stable pilgrims flow that is free from resentment”, The Minister lauded.

Reacting to the Minister’s compliment, the Deputy General Manager of Sierra Leone AirPort SLAA, Mr. Jack D.K Massaquoi thanked the Minister of Social Welfare for the laudable comments she made of the Airport Management.

He recalled that over the past years Management has been facing constraints whenever there is a movement of Muslim pilgrims to the holy land of Mecca.

He noted that as a responsible Management, SLAA has concentrated their studies in areas that have always posed a threat to airport coordination of Hajj movement with a bid to finding lasting solutions to address them.

He noted that the airport is moving towards international certification and there is every need to be proactive in all related operation. The DGM thanked SLAA personnel and its complementing agencies for a job well done and encouraged all to be prudent in their respective duties.

The 2019 Hajj pilgrims were carefully boarded in Sierra Leone Road Transport Corporation Buses right at the foot of the chartered 747 Boeing ‘FlyNas’ aircraft and traveled via Port Loko to the National Stadium in Freetown.