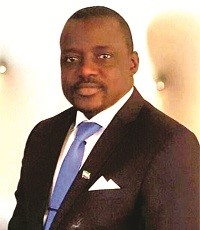 During the Commission of Inquiry (65) proceedings  presided over by Justice Bankole Thompson on Monday September 2, former Minister of Information and Communications in the last Government ,Mohamed Bangura, denied receiving $44,000, $50,306 and $100,000 respectively at different times during his tenure in office between 2016 and 2017.

Making a cameo appearance at Commission 65 on Monday September 2, the former Minister of Information denied collecting the sum of $44,000 from NATCOM through their Finance Director, Mr. Foday Conteh to attend an ICT conference.

Bangura even denied ever calling Mr. Foday Conteh of NATCOM to instruct him to disburse the sum of $44,000 to him for any purpose, adding that he does not even know the said Mr. Foday Conteh.

The former Information Minister also denied ever calling Mr. Senesie Kallon former Director General of NATCOM authorizing such payment to him for whatever purpose.

Asked by his Solicitor Mr. Ady Macauley if he ever received the sum of $50,306 from the former Permanent Secretary in the Ministry of Information and Communications, Mohamed Bangura denied the allegation saying he never received such amount of money from the former PS, adding that he never called the Financed Director at NATCOM Mr. Foday Conteh to make any such payment to him.

Quizzed further as to whether he ever received from Mr. Paul Sandi, the sum of $100,000 from NATCOM International Gateway Funds, the former Information Minister replied in the negative.

He also told the Commission that he never received Le 20,000,000 from SALCAB as good bye token when his tenure as MIC was terminated by the former President Ernest Bai Koroma.

Mr. Mohamed Bangura said it is not a usual practice or policy for Ministers to ask for good bye gifts or token from institutions.

During cross examination by State Counsel, R.B. Kowa, Mohamed Bangura acquiesced that based on evidences available at the Commission, the policy of paying monies to institutions and not individuals was breached and that monies were paid directly to individuals.

Robert Kowa also quizzed him as to why three esteemed personalities Messrs Paul Sandi, Foday Conteh and Senesie Kallon can all corroborate evidence pointing at him collecting the said amounts of money from state institutions, but he replied that it might be to cover up.

It would be recalled that State witnesses, Mr. Paul Sandi, former Permanent Secretary in the Ministry of Information and Communications, Mr. Foday Conteh former Finance Director NATCOM and Mr. Senesie Kallon former Director General NATCOM had all given evidence at Commission 65 alleging that the former Minister of Information and Communications Hon. Mohamed Bangura inappropriately received $44,000, $50,306 and $100,000 respectively from NATCOM and SALCAB during his tenure in Cabinet.