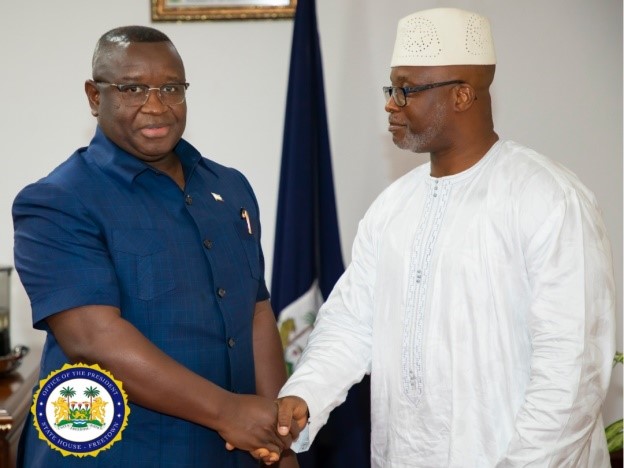 Sierra Leone’s first Ambassador to the Republic of Turkey, Mohamed Hassan Kaisamba, has taken leave of His Excellency President Dr. Julius Maada Bio to officially take up his duties in the transcontinental Eurasian country with the world’s 13th largest economy. This took place at State House in Freetown, on Friday 14 February 2020.

Turkish-Sierra Leonean relations were established in 1971. Sierra Leone recently opened its first resident Embassy in Ankara, the capital of Turkey, which is among the founding members of the Organisation for Economic Co-operation and Development.

Ambassador Mohamed Hassan Kaisamba told President Dr. Julius Maada Bio that he was thankful for the confidence reposed in him to represent his country abroad, adding that he considered his appointment as an esteemed privilege. He assured that he was determined to do his best and to work towards portraying the best interest of the small resource-rich West African nation.

“His Excellency, I am aware of your urgency and determination to make life better for every Sierra Leonean. It is my plan to utilise every opportunity, my appointment avails me, to compliment your national objectives for this country,” Ambassador Kaisamba said.

In his response, the President congratulated the new diplomat and wished him well in his new capacity, adding that the task ahead was quite tough but that he would encourage him to be resilient so that success could be achieved.

“You are aware of the magnitude of challenges we are facing as a nation and as an administration. I have chosen you meticulously as a person to go and represent Sierra Leone in the Republic of Turkey. Therefore, as you go, you have to pay more attention to economic diplomacy so that you can bring something home that we will have to add to the development process of the country,” he urged.