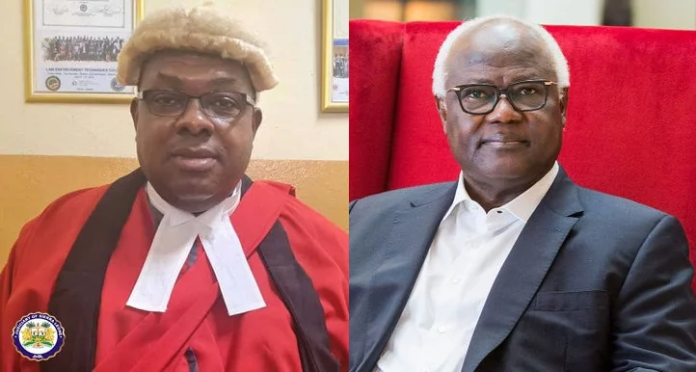 High Court Judge, Justice Adrian Fisher the High Court Judge who recently gave a ruling in the matter between Peter Conteh and the Executive of the APC, has stated that the members of the well-known APC National Executive including the Chairman, Ernest Bai Koroma; National Secretary General, Ambassador Osman Foday Yansaneh will risk landing in jail if they fail to comply with his judgment.

He made that pronouncement on after the long awaited conclusion of the Alfred Peter Conteh Vs Ernest Bai Koroma & APC’s Case.

It could be recalled that in his ruling, Justice Adrian Fisher dissolved the current APC National Executive including the National Secretary General, Ambassador Osman Foday Yansaneh, whom he ordered to vacate office within 14 Days and to further provide handover notes to the Interim Committee.

He also placed a perpetual injunction granted against the current National Executive from holding themselves out as Executive members, meaning they are no longer eligible to contest for any Executive position in the party.

“If you disobey this order you may be found guilty of contempt of court and may be sent to prison or fined or your assets may be seized”, Justice Fisher told the defendants.

He stated that the National Advisory Council (NAC) and all the Executive members of the APC were illegal in office as they were not democratically elected as required by the 1995 APC constitution and or the 1991 constitution of Sierra Leone.

The Judge continued that NAC in particular, save for the Chairman and Deputy Chairman, was not properly constituted as majority of their members were not democratically elected into office.

Justice Adrian also stated that the Leader of the Opposition in Parliament, who is Hon Chernor Bah alias Chericoco shall nominate the following in consultation with members of Parliament: 2 from the North, 2 from the North West, 2 from Western Area, 2 from South,1 Young Generation representative, 1 Diaspora, 1 Women’s wing representative 1 legal representative of the party of not less than 20 years standing.

Added to that, he ruled that the Interim Transition Committee should be formed on or before 14 days of the order of the Judge, exactly the 15th May 2022 to take up office.

Looking into the legality of the APC National Executive, Justice Adrian Fisher said the APC Executive ought to have been elected, not selected.

“The Nation Advisory Committee of the All People’s Congress party doesn’t have the POWER to override the party’s Constitution.” Justice Fisher said, adding that the APC National Executive was illegally selected and not elected.

“APC acted contrary to its 1995 Constitution and the Sierra Leone 1991 Constitution,” said Justice Fisher, adding, “Political Parties are there to shape the Political Will of the People.”

He said there are no minutes of NAC meeting/s to be provided to the Court to confirm or dispute whether NAC met.

Furthermore, the legal representative of Alfred P. Conteh, Jessie M. Jengo Esq on behalf of his client has demanded over Le1.3 Billion from former President Ernest Bai Koroma and the All People’s Congress (APC) Executive which he made after the law court ruling.

According to Judiciary of Sierra Leone Communications, Jessie M. Jengo on behalf of his client asked the Court to award a cost of $83,860, an equivalent of  Le1, 313, 617, 000 after successfully obtaining a perpetual injunction against the Defendant from holding themselves out as Executive members of the APC Party.