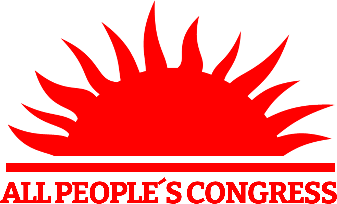 In the wake of the release of the Government White Paper on the Commission of Inquiry Report, the All People’s Congress (APC) Party issued a Press Statement on the 27th September 2020 stating its position.

The Party said it notes, with no surprise, thefindings and recommendations contained in the Government White Paper and Reports of the Commissions of Inquiry (COI).

It continues that they observe with grave concern that the findings and recommendations are consistent with those contained in the Government Transition Team (GTT) Report authored exclusively by members of the Sierra Leone People’s Party (SLPP).

The APC Party disclosed how it had registered its concern that the GTT Report maliciously targeted officials of the past APC Government by investigating, indicting, and punishing them, even before the flawed Commissions of Inquiry were established.

According to the party a case in point is the continued imposition of an unlawful travel ban on and freezing of bank accounts of past APC Government officials, without any order of the High Court sanctioning same.

“It is therefore discernible that the Commissions of Inquiry are the interpretations of the overt intentions of the GTT report: Members of the SLPP who served on the GTT assumed the roles of investigators, persecutors, interpreters and enforcers of the law. From the outset, the sole aim of the SLPP Government was and has always been to unfairly malign and victimize APC stalwarts for political gains,” the APC underscored in strong terms.

The party stated how it wishes it to be known that its leadership and members will support any accountability process that is fair, independent and accountable to the Constitution and the people of Sierra Leone.

It went on  that given that the Commissions of Inquiry set up by the SLPP Government were neither constitutional, fair, independent nor accountable, the APC Party hereby states in the strongest possible terms that the Government White Paper and COI reports are politically motivated, legally flawed and procedurally defective.

The Party maintained that a COI process that is unaccountable to the Constitution of Sierra Leone and deliberately refused to be scrutinized cannot, by the same stretch, scrutinize and hold Persons of Interest (POIs) accountable. Against that backdrop, the APC said it therefore rejects the findings and recommendations of the Government White Paper and COI reports in their entirety.

Part of the content of the Press Statement says some, among many other reasons which will be addressed in due course that informed the APC’s decision are as follows:

Joining the Legislative and Executive Arms, the APC continued that the Chief Justice of the Judiciary deliberately but compliantly refused and/or failed to empanel judges and assign the matter for hearing and determination.

Similarly, it stated, the application filed by the Sierra Leone Bar Association, an apolitical organisation, in respect of the same issue suffered the same fate.

The APC said thirdly, that upon the start of the COI proceedings, lawyers representing Persons of Interest raised the same objection that, the COIs could not start to conduct proceedings without rules governing their practice and procedure made by the Rules of Court Committee as provided for by Section 150 of the Constitution. All three Commissioners overruled the objection, and wrongly asserted that they were empowered to make rules regarding the practice and procedure of their respective COI.

Again the party maintained that further to the above, lawyers representing Persons of Interest, filed another application to the Supreme Court, seeking a review of the Commissioners’ rulings as provided for by the Constitution by filing an Originating Notice of Motion dated 28th May, 2019. Again, the compliant Chief Justice with the Executive Arm failed, refused and/or neglected to assign the matter for hearing and determination.

Still justifying its position, the APC said the Commissioners of the COI breached Section 150 of the Constitution and Order 62 rules 1 and 2 of the High Court Rules 2007, which give only the Chief Justice the power to prescribe Practice Directions, issued Practice Directions dated 31st January, 2019, adopting the High Court Rules 2007 in regard proceedings of the COI. This further compounded the unconstitutionality and illegality of the COI and their proceedings.

The APC said in view of the facts narrated above, the party feels compelled to restate that the findings and recommendations in the Government White Paper and COI reports are a product of a process marred by unconstitutionality, illegality, procedural corruption, political vindictiveness and malice.

It was reiterated that the APC rejects and shall support Persons of Interest to challenge the findings and recommendations of the Government White Paper and COI reports politically, diplomatically and legally at both local and international levels.

The APC also pointed out that it shall also assist Persons of Interest to address substantive issues contained in the Government White Paper and COI reports in due course, most of which are, from a cursory look, inaccurate, malicious and borne out of a mis-appreciation of facts and law.

It concluded by stating how an unconstitutional and unaccountable process cannot hold Persons of Interest most of whom are their members accountable. Period!