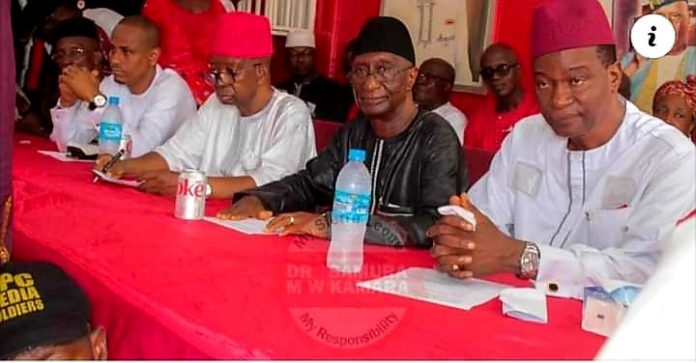 It can be recalled that this is not the first time that Justice Adrian Fisher ordered the main opposition, All People’s Congress (APC) to set up a 21-Man Interim Transition Governing Committee.

As the Alfred Peter Conteh petition unfolded in court, in August 2021 Justice Adrian Fisher’ s orders for a 21- man committee to take the All People’s Congress ( APC) to its emergency national convention to ratify their new constitution. The people selected were representative of all the factions in the matter. They were:

From the National Advisory Council:

The PRO of the Guinean branch Mr. Mohamed Bangura

The setting up of the second 21-man committee was the climax of the legal battle between Alfred Peter Conteh and the former President Ernest Bai Koroma APC National Executive which was ordered dissolved by Justice Adrian and the then National Secretary General – Osman Foday Yansaneh to vacate office within 14 days and to provide handover notes to an Interim Committee (the 21-man committee).

Justice Fisher said an Interim Transition Governing Committee that shall comprise of 21 officers, of which nine members of the Committee shall be appointed by the Plaintiff – Peter Conteh, one of which shall be the Chairman, be formed to conduct the forthcoming National Delegates Conference.

Meanwhile, students of political science, as well as lawyers interested in constitutional matters have praised Alfred Peter Conteh and Justice Fisher for paving the way to APC having a new constitution that they describe as a democratic legal document that fosters a modern day democratic style of leadership; one that they said other political parties can copy for a better leadership going forward.

It can be recalled that at the behest of the party’s National Advisory Committee, a Constitutional Review Committee completed its mandate and submitted a Report on the party’s new constitution. Part of it reads:

“BEARING IN MIND the applicable provisions enshrined in the Sierra Leone Constitution and as set forth in the Political Parties Registration Commission Act and the Electoral Laws relating to regulation of political parties;

“HOLDING the conviction that we are called upon by duty to lead our Nation and its most populous political Party for generations to come, against nepotism, corruption, ethnicity, lack of transparency and accountability and ethics, through the struggles and sacrifices of the aged, the women, the youths, the disabled, the students, the underprivileged, including workers, farmers, marketers, professionals and technocrats, trade unions, social, cultural, religious, professional and political organizations for reconstruction and development;

“NOW THEREFORE we the members of the All People’s Congress in fulfillment of our historic mandate to build a mass based democratic structure determined to render service at all levels of governance; and to build a nation which will guarantee equal opportunity for all, mutual and peaceful co – existence, eliminate all forms of discrimination and social injustice, promote the interest of minority and marginalized groups, render selfless service that will rekindle a deep sense of patriotism and nationalism; hereby make, enact and give the following Constitution to ourselves for effective administration of our Party and the promotion of its ideals, aims and objectives…”