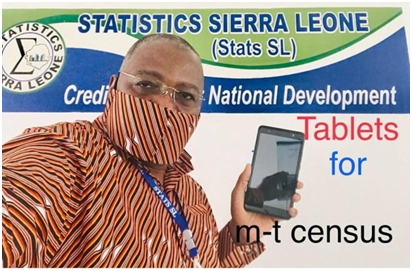 Professor Osman Sankoh, the Chief Census Officer, who doubles as the Statistician-General of Statistics Sierra Leone (Stats-SL) says Stats-SL now has a reliable sampling frame to support all important socio-economic surveys for local and national development planning purposes, adding that henceforth they will be able to provide Locality, Ward, Section, Chiefdom, District and Regional level population data that can be generated in a timely manner.

He made that statement on the 31st May, 2022 , at the official announcement ceremony of the provisional result for the 2021 Mid-Term Population and Housing Census (MTPHC), which is the first ever digital Census in Sierra Leone.

“We wish to emphasize that before the Mid-Term Census was conducted, Stats SL was most of the time unable to provide data to development partners and other institutions requesting specific area-based population data…

“Today, the results of our digital cartography and digital enumeration will provide answers,” says Prof. Sankoh.

He said the results would assist Government to identify the social and economic status of the citizens in the country,

“This will help Government to devise interventions necessary to leapfrog the vulnerable in our society from their current socio-economic status,” he said.

The SG stressed that everyone in Sierra Leone was counted where he or she slept on the Census Night of December 9th, adding that the population reported was the “census night population”, where people slept on that night, whether or not those were their usual places of residence.

“It is an established fact that for various reasons, people move to their home towns and villages to be counted there. We call this phenomenon the influential one night in-country census migration,” he explained.

Prof. Sankoh announced the provisional results providing the total population figures by sex at the District and Regional levels, stating that the population of Sierra Leone from the 2021 Mid-Term Population and Housing Census was 7,541,641 with 3,716,263* males and 3,825,378* making a sex ratio of 0.97 in favour of females.

On his part, the Development Secretary, Peter Sam-Kpakra explained the role of the Ministry of Planning and Economic Development, particularly the current Minister, Dr. Francis Kai-Kai and his predecessor Nabeela Tunis for their exceptional support provided to Stats SL during the period the census lasted.

He said the Census would provide baseline data that would continue to serve as a reference point for Sierra Leone’s development trajectories.

Mona Korsgard, Chief of Evidence, Policy and Social Protection for UNICEF Sierra Leone, in her statement, said UNICEF was pleased to support the Census process, noting that it would be important for all to use the data for policy making, planning and programming to better reach the population with social services such as health, education, and sustainable jobs for young people who enter the labour market.

The Executive Director of Accountability Sierra Leone, William Sao-Lamin said as civil society they believed that any development activity should be informed by a credible and reliable data that would help to hold duty bearers accountable if there are any defaults.

He appealed to all development partners, Ministries, Departments and Agencies to always call on StatsSL for reliable data of any development activity they may want to carry out in any community in the country.

As soon as the Census results were announced and released, a flurry of reactions started emanating from various angles. Leader of the main Opposition in Parliament, Hon. Chernor R.M. Bah described the results as far from credible while urging the House not to entertain it.

One of the former flagbearers of the opposition All People’s Congress (APC) party, Joseph Fitzgerald Kamara (JFK) described the mid-term census report as corrupted data saying it is a flawed Census Report and very disturbing.

He said, “More dangerous is the manner in which it is being forcefully shoved down our throats in a chilling cold-blooded fashion, choking our common sense and intellect to death.”

Dr. Dennis Bright, the Chairman & Leader of NGC said It is abundantly clear that this census was brewed specifically to favour the chances of the ruling SLPP regime in the forthcoming election. Using these skewed results, it is more than likely that the Electoral Commission of Sierra Leone (ECSL) will soon be going to work to try to carve out new boundaries and provide more seats in Parliament for those areas in the South and East where SSL says the population has increased and probably reduce the number of Parliamentary seats for the Northern and Western regions where they say the population has decreased. 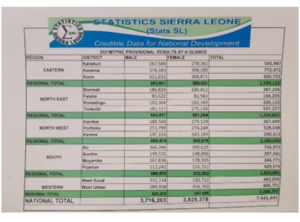