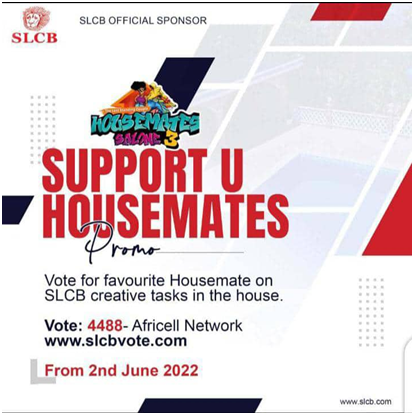 Yesterday’s eviction of some among the 22 Housemates currently competing in the Season 3 edition of Housemates Salone, with the slogan, “Di Game Get Yagba, If You Nor Able Na for Pull Hand”, was very interesting, exciting, moving and solemn especially for the Housemates and their fans who were affected. Seeing them leaving the House reluctantly in tears theirs would mark a very momentous day in their lives as an end was put to their wildest dreams and ambitions to emerge as the ultimate winner of the Reality TV Show.

The drama , the glitz and the momentary suspense  keeping viewers guessing what will come next all added flavour and style to the show and created all the trappings befitting an excellent episode of a Reality TV Show which some described as tough, crazy, fearful but also funny.

In a positive development, Sierra Leone’s leading commercial institution, the Sierra Leone Commercial Bank, with a reputation for promoting many worthy human and social causes, has thrown its weight behind the popular African Young Voices (AYV) media Housemate Salone Season 3 show as an official sponsor and also with its promotion “SUPPORT U HOUSEMATES”.

During the promotion period, existing SLCB account holders have to enroll for digital services and maintain a minimum account balance of L250,000 to have the chance to win weekly prizes.

Non-customers are encouraged to open an account, sign up for digital services, and keep a minimum account balance of Le 250.000 to be eligible for weekly prizes.

The SLCB “Support U House Mates” Promotion is also meant to vote for a favourite Housemate on SLCB Creative Tasks in the House by texting to 4488 Africell Network or on the website: www.slcbvote.com.

Housemates Salone is a Sierra Leonean Reality Game, Love and Impacts Reality TV show based on a local content format.

Housemates Salone features a group of contestants known as “Housemates” who live together in both enclosed and open-space houses that are accessible to the public.

This year’s “Yagba Season,” which was officially launched on Sunday, February 13th, 2022 at Mamba Point Lagoonda in Freetown, was graced by high-profile guests including the Minister of Tourism and Cultural Affairs,  Memunatu Pratt, CEO of AYV, Amb. Anthony Navo Jnr, CEO of Africell, Shadi Gerjawi, Ms Saraih Robert, winner of the Housemates Salone Season 2, and people from various walks of life.

In the three years that it has been hosted, Housemates Salone has gone international. This year’s show is shown on the global Multi-Choice DSTV platform.

Prominent personalities that battled in the heats to enter the House this year include Patricia Rose Tucker (#53), a student at Njala University studying B.Sc Honors in Business Administration and Management; Ina Elizabeth Cole (#30), an IT graduate in Database Technology at IPMC College in Accra (Ghana); and George Taylor (#26), a chef based in the United States of America.

Almon Sall (#8) is an undergraduate pursuing a B.Sc. Degree in Public Sector Management and also takes modelling as a career. Lolo Simeon (#41) is an international model, interpreter, entrepreneur and founder of Fashion To Empower SL and Let Our Children Dream Foundation; Nohmi George (#49), an actor who has been part of the Actors Guild of Nigeria (AGN) after featuring in several Nigerian movies for years; Jeanie Healen Sundufu (#59), is a graduate of Fourah Bay College (FBC) with a certificate in Population Analysis and Social Statistics and a Bachelor of Science in Commerce; Daniel Sesay (#14), an

the entertainer who has helped and inspired youngsters that want to promote movies, modelling, acting, and dancing; Patricia Rebecca

Jamestina Will (#52), is enrolled at Fourah Bay College; Juliana Conteh

(#35), currently living at Iowa State, and streetwise kid and young 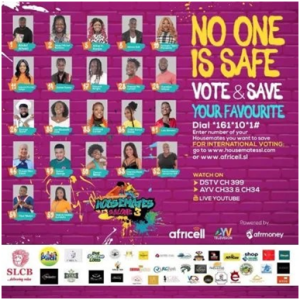 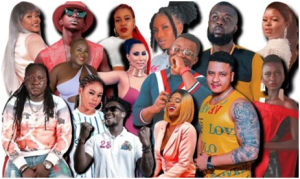