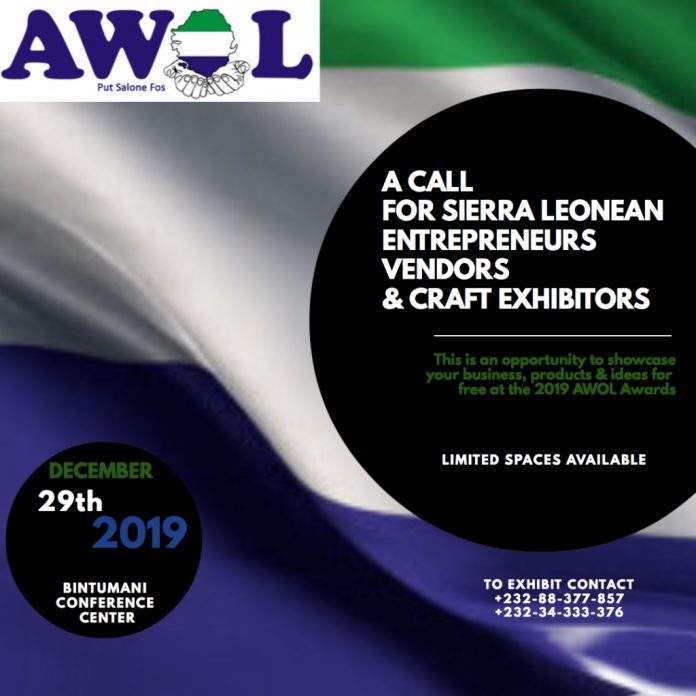 The Mother of all Award Ceremonies in the country is just few days from now to happen. It is the All Walks of Life (AWOL) 2019 National Achievements Awards slated to take place at the prestigious Bintumani International Conference Centre at Aberdeen on the 29th December 2019, starting at 7pm. The voting process is at an advanced stage but it is rill open to members of the public who are at liberty to vote for nominated personalities and institutions whom they are convinced did something very outstanding in 2019 to improve the lot of the masses and enhance overall development. One can vote by just sending 2713 short code to SMS via Africell for an individual or institution that one believes must clinch the covetous 2019 award.

This year’s Awards ceremony will be slightly different as the All ‘Works’ Of Life Development Organisation (AWOL) has extended invitation to Sierra Leonean Entrepreneurs, Vendors and Craft Exhibitors to showcase their business, products and ideas for free.  The organizers have reiterated that limited space is available.

From a cue that this medium received, on that day, it will be all pomp and pageantry as the crème de la crème of society and people from various walks of life will hob-nob, chatting over drinks, fixing appointments and making new friends. As usual it will be a nite to socialize in a relaxed atmosphere with music at the background and entertaining performances displayed by some of our local artists.

Commencing at 7pm, the AWOL Awards nite will shine the light on those that were overwhelming voted for by members of the public whom they deemed did exceptionally well in improving humanity and contribute meaningfully to the socio-economic development of the country.

Voting is now in process and to vote just send 2713 short code to SMS via Africell for an individual or institution that one believes must clinch the covetous 2019 award.

For an individual or institution to be recognized, appreciated and awarded for doing something very exceptional within the year could be a source from which inspiration is drawn to do more. It could also serve as a springboard to emulate the exemplary footsteps others have taken to meaningfully make meaningful impacts on the lives of others.

Indeed, as usual, in the immediate wake of the event indisputably tongues will be left wagging as to whether indeed a particular personality or institution truly deserves to be awarded. But that is natural as we sometimes disagree to agree. But one thing that is really obvious is that AWOL prides itself on selflessness and integrity which is why its award programmes have always been characterized by fairness. It is not AWOL that determines who should be a recipient of an award as a voting process is currently ongoing for people to vote their consciences for nominated personalities and institutions whom they truly believe should be recognized for their immense contributions to humanity and nation-building. You are at liberty to vote now by using 2713 short code to SMS via Africell for an individual or institution whom one believes must clinch the covetous 2019 award.

From all indications and judging from the nominations that have been done for the different categories it seems that this Awards Ceremony is going to be the Mother of all AWOL Awards Ceremonies but as some have already maintained that is yet to be determined. However, what for now is really certain is that AWOL has etched a name in history for doing BIG THINGS and this time round there will to be an exception nor is it going to be the last as we have been hinted.

In order to reiterate the message loud and clear the widely acclaimed National Achievements Awards (NAAs) will be dished out to deserving individuals and institutions on the 29th December 2019 at the Bintumani International Conference Centre starting at 7pm with the theme “Education is the Key to National Cohesion and Development” under the distinguished patronage of His Excellency President Julius Maada Bio.

As it had been over the years it is planned to be an unforgettable ceremony that will be laced with pomp and pageantry bringing together under one roof the crème de la crème of society to socialize. It is going to be a nite of fun, jokes and laughter; a moment that will be lively when the spotlight will shine on individuals and institutions that have been recognized for their exemplary contributions to nation building and as such bestowed prestigious awards for their efforts.

Already, on the 22nd November 2019, the launch of the National Achievement Awards was done at the Radisson Blu Hotel and it was graced by individuals from various walks of life including the Chief Minister who on that day described AWOL as an organization which has as its aim and objective to celebrate ‘change-makers’ whom he referred to as those people who are doing their utmost in their little corners to put Sierra Leone first and set bright examples for others to emulate.

During the occasion the President of AWOL, Ambassador Anthony Navo Jr informed the audience that AWOL was formed 20 years ago to serve the country in a distinct fashion. He added that coming from an 11 year war, as young people, they decided to form a group with a distinct mission to recognize distinguished Sierra Leoneans, as well as to complement and serve as an auxiliary to government and this they have been doing successfully since the founding of AWOL.

Indisputably, AWOL’s National Achievement Awards have now become an important feature in the calendar of annual events in Sierra Leone. Come as it does towards the close of the year, most Sierra Leoneans see it as part of their Christmas and End of Year entertainment recipe. During the course of the year, AWOL keenly watched Sierra Leoneans in their various works of life as well as institutions with the avowed objective of recognizing them for their good works.

As a family, AWOL considers that approach as a trend as “it adds worth and meaning to our efforts, and brings fulfillment to our dreams; for over and above recognizing and awarding merit, effort, achievement, ability, devotion, commitment and scholarship, to deserving Sierra Leoneans.’

AWOL is also working in underprivileged communities through its various social, educational and humanitarian interventions.

Contrary to what some may want to believe, it should however be noted that AWOL is a non-political and non-profitable organization, which focuses on national development. AWOL’s philosophy is to be selfless, to serve, to give back to society and expect nothing in return as reward or profit.

AWOL is hinged on determination to complement government’s effort in nation building; regardless of which democratic government is in power.

It is on record that AWOL has stayed together as a group, worked together as a family, and pursued its goals and aspirations as patriotic Sierra Leoneans who care and love their country. As may be the case in other organizations, AWOL may have its own internal problems, for no group or organization exists without conflict; but AWOL has been able to resolve its differences amicably without any threat to the developmental aspirations of the organization as a whole.

One thing that makes AWOL very outstanding and which is part of its constitution is the fact that no individual member is bigger than the organization. AWOL is bigger than each one and their leaders are charged with the responsibility to always bring members together as a family, maintain and promote the traditions that have held AWOL together since the founding and current members became one family 18 years ago.

President of AWOL, Ambassador Anthony Navo Jr., maintains that over these eighteen years AWOL’s contributions to national development have been immense.

From all indications, it is going to be an unforgettable nite that will linger in the minds of many here and abroad.

Below is the list of nominees that could be voted for by sending a text message on Africell line to 2713:

Vote now for individuals and institutions you are convinced deserve the prestigious AWOL Awards.