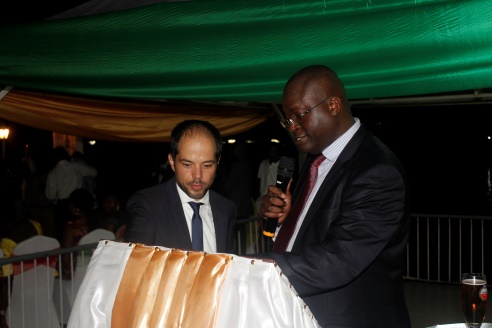 Addressing his audience, the outgoing Managing Director SL-Brewery, Daaf Van Tilburg expressed his appreciation to his team for such an event to bid farewell in honour of his service as Managing Director over the past years, adding that they were key partners and stakeholders and that he acknowledges them as being very important for the success of the company in previous years.

“I am having mixed emotions as I had a great career opportunity for which I am grateful. I am very sad to leave a beautiful country like Sierra Leone and it’s a pleasure to say that my family and I had a fantastic time in Sierra Leone,” he said with profuse smiles.

Highlighting some achievements made he disclosed that as a team, they made great improvements, adding that they invested over 35 million EUR in  the SL- Brewery limited.

He said the implementation of such a programme, whilst running the business was complex but with the support of the team they were able to achieve it and it was successful and that the Brewery is now fully modernized with extended capacity.

He noted that along with the investments the company has made in the modernization of the company, they also invested in the people of Sierra Leone and that the company has been steadily growing in the last year.

“More than 95% of our employees are Sierra Leoneans and it is amazing how they have developed and adapted to using modern state-of-the-art technology. One example, our state-of-the-art canning line is now 100% run by young and promising Sierra Leonean engineers and technicians. This is fantastic,” he exclaimed!

He said that they were also able to invest in their consumers, as they invested in new brands and they all look refreshed and modern, adding that they introduced innovations like Star Citron, Trenk, Dark Malt Energy and Amstel International Lager Beer and a full canning format portfolio; the first of its kind which is very much appreciated by everyone.

He noted that they worked together with their distributors to provide the best service. At the same time, they invested a lot of time and effort in sorghum development and communities via different corporate social responsibility projects.
‘I saw the great impact, which our company has had on communities and livelihoods of Sierra Leone,’ he said. He maintained that they have also made a large amount of tax contribution to government revenue. Nevertheless, he added that with their investments, they have also contributed to creating benefits for thousands of people directly and indirectly through jobs at the brewery, and as distributors, suppliers, transporters, the entertainment sector, retailers and most importantly the sorghum development project in which tens of thousands of farmers and family members benefitted.

He further noted that since last year, they have started a Hawker project in which they have equipped over 2000 entrepreneurs with equipment to build their own businesses and that he is of the strong belief that the socio-economic development of Sierra Leone will be achieved through the establishment of a strong private sector.

He applauded his fellow Board and Council Members for their great collaboration as he has invested a lot of time in his role as Council Member of the Chamber of Commerce.

He introduced and welcomed Laurent Bukasa. Laurent Bukasa is the incoming Managing Director of SL Brewery Limited. He was until recently the Corporate Affairs Manager in the Heineken operation in DR Congo and has a long international career in Heineken in different designations as commercial, country manager and corporate affairs manager.

He underscored that with his great experience, the incoming GM will add a lot of value to the business here in Sierra Leone and encouraged his team to give him a warm welcome and support in every way they can.

Managing Director Designate, SL Brewery Limited, Laurent Bukasa, applauded Daaf Van Tilburg  for the tremendous work he has done in the past years at the Brewery, adding that it is a great pleasure to have joined Sierra Leone Brewery Limited, which is part of the HEINEKEN Group.

He considered himself fortunate to have been given this opportunity to join an organization with such a fine reputation and goodwill for its quality products/services/ and for its contribution to national development and that of communities in this beautiful country, Sierra Leone.

He noted that the Managing Director position offers a new and exciting platform to him and he is looking forward to do the job.

“Prior to coming to Sierra Leone Brewery Limited, I have worked for HEINEKEN for over 23 years. My background entails a lot of experience in the field of Marketing and Sales. The last position I held was Corporate Affairs Director of the HEINEKEN Brewery in DR Congo,” he added.

He noted that at HEINEKEN, they are partners for growth and development in any country in which they operate and as Managing Director, he promised to maintain all these links and useful engagement with stakeholders including the Government of Sierra Leone, distributors, suppliers, the Chamber of Commerce, Association of Manufacturers, Employers Federation, Sorghum Farmers and Marketers Association, MCCU and all other partners.

He promised that they will continue with the outgoing MD’s trajectory to invest on capacity and quality to meet the demands of the market. For their consumers, he said ‘we are committed to good services at all times” and confirmed that his team will keep an open door policy and continue with laid down strategy to be the best in class in Sierra Leone. 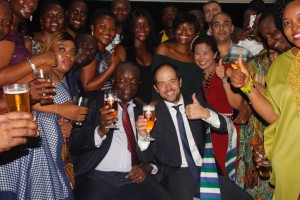