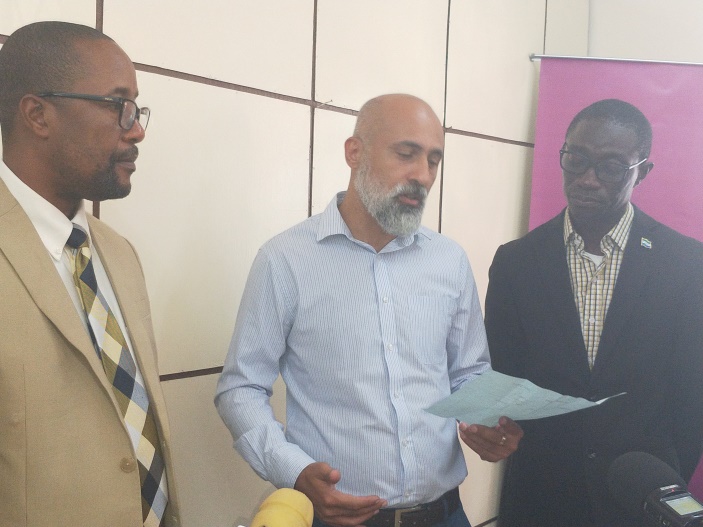 Africell Sierra Leone, one of the country’s leading mobile companies operating in the country, in partnership with the Ministry of Information and Communications, has on Thursday 21th November, 2019 donated office furniture or equipment to the  Sierra Leone News Agency (SLENA) facility on Wallace Johnson Street in Freetown.

In his address to those who graced the occasion, the Minister of Information and Communications, Mohamed Rado Swarray said that when he took over as Minister the Sierra Leone News Agency (SLENA) building was in a dilapidated state and as a Minister he was very concerned.

He further revealed how he was able to approach Orange SL for the rehabilitation of the said building, in order to make the building habitable furthering how he is very pleased to see Africell-SL furnishing the Sierra Leone News Agency facility with state-of-the-art furniture.

The Minister said Government is committed to ensuring that they empower the media and also create an enabling working environment for journalists.

He applauded Africell-SL for its support in making this dream become a reality.

Admonishing the Management and Staff of SLENA, he entreated them to always ensure that their work is professionally done within the realm of informing the populace on current happenings.

Chief Executive Officer of Africell Sierra Leone, Shadi Al-Gerjawi applauded the Ministry of Information and Communications for their partnership in making the furnishing of the SLENA facility a possibility, adding that as a company they believe in positive change and will ensure they contribute meaningfully towards the development of the country.

He said that the furnishing of the SLENA facility with furniture manifests their dogged commitment towards rebranding the media in the country.

Station Manager, Afriradio, John Konteh underscored how SLENA has been working assiduously to rebrand the media  adding that Africell is pleased to hand over the items to SLENA saying such will ignite the perception of what SLENA was known for in the past.