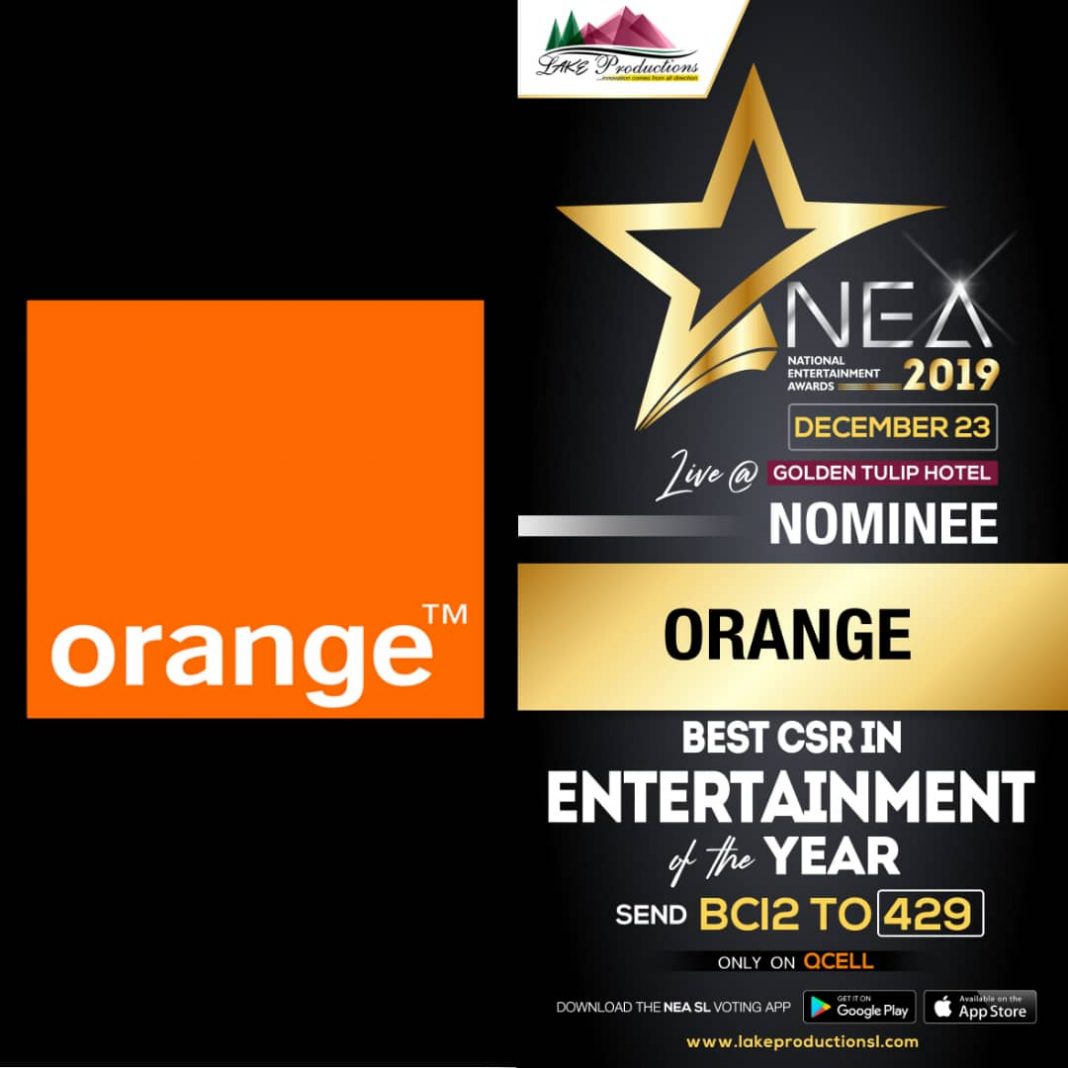 One of Sierra Leone’s leading GSM mobile operators Orange Sierra Leone has been nominated as an institution of Best Corporate Social Responsibility (CSR) in Entertainment for 2019. Orange was nominated among several other institutions and companies for the upcoming National Entertainment Awards (NEA) slated to take place on the 23rd December, 2019 live at the Golden Tulip Hotel.

Among several ways in which Orange-SL has contributed to the growth of the entertainment industry includes direct sponsorship and indirect assistance.

The company has been very forthright in signing Memoranda of Understanding with big artists in the entertainment industry to become brand ambassadors to help market the various products it has to offer to the general public. Through this means the company has been creating avenues by which these artists could be projected to reach other higher heights.

The NEA awards ceremony is an annual event designed to celebrate talented Sierra Leoneans with artistic skills in music, film, comedy, fashion, tourism, sports and cultural heritage, for personal and interpersonal growth. More importantly, it is designed to re-brand Sierra Leone to the outside world through entertainment.

The first and second editions of the National Entertainment Award (NEA 2017 and 2018) were held at the Bintumani International Auditorium in Aberdeen, Freetown and were organized by the LAKE Production (SL) Ltd, in partnership with RUGGED and the Ministry of Tourism and Cultural Affairs.

The maiden edition (NEA 2017) was one of professional showbiz of its time in the country. It brought the best in entertainment including fifteen government ministers, two of the biggest TV channels in the world, TV5 France and Hip TV-DSTV, and one of Nigeria’s biggest event host, blogger & CEO of Pocket TV – Osh Money.

As one observer at that time puts it, “The Bintumani Conference Centre was coroneted and transformed into an opera or a royal castle of Kings and Queens of entertainment. The euphoria was splendid, with ecstatic extravaganza. That was just the tip of an iceberg, all thanks to LAKE Productions (the premier and hosting company of NEA).”

NEA is assiduously striving to bring home the flavour of the BET, the Afrima, the Grammy and the Oscars kind of awards to Sierra Leone. NEA is the absolute ‘Taste of Elegance.’

The 2018 NEA awards ceremony is the ONLY event that brings together over 300 entertainers (from music, fashion, movie, sports, etc) in one night.

Many that this medium engaged to comment on the nomination of Orange Sierra Leone opined that the company deserves it bordering their assertion on the qualitative and dependable communications service delivery platforms that the company is offering. Some even went to the extent of predicting that the company will surely emerge victorious to bag the prestigious award.