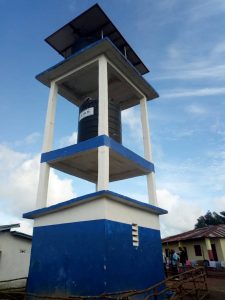 Chairman of the event, Tamba Raymond Gbetuwa, who doubles as Permanent Secretary in the Ministry of Water Resources said the Ministry is very committed to go along with the New Direction Manifesto, in which water is a priority. He stated that they have currently embarked on various projects with water agencies like SALWACO and Guma Valley Water Company (GVWC).

Fallah K. Tengbeh, Senior Project Manager, Ministry of Water Resources ,said the 100 Solar-powered Boreholes and Civil Works are environmentally-friendly and they are the fastest and cheapest means of providing safe water, and  used all over Africa. He stated that each of the Boreholes will serve over two thousand people and that is why the allocation was done based on needs assessment in those communities and that it will serve for decades if the communities handle them with care.

Alhaji Issa Sallieu Barrie, Chief Executive Officer, Hadissa SL Limited thanked President Julius Maada Bio, Vice President Dr. Mohamed Juldeh Jalloh and the entire Government for restoring confidence to local contractors. He continued to say that the company is 100% Sierra Leonean with about 1000 Sierra Leoneans employed and ‘that is why we also try not to let our people down because working on this project is just like we are working for ourselves because this is our country and I am an indigene of Kono District and we are very passionate to be part of development and we know how water has been a problem for our women and children in the country.’

Sallieu Barrie further stated that Hadissa is committed to doing quality work and timely delivery is a key priority to us. “We are a company that also works on Civil Engineering Construction.”

The 100 Solar-powered Boreholes and Civil Works will go a long way to ease the water crisis nationwide  because the 100 Boreholes will produce 1500 water catchment points for communities, and each Solar Borehole will supply 15 stand posts (taps) at a distance of 60 to 65 meters.

Giving his statement, Vice President VP Jalloh said the Commissioning of the Hadissa constructed Solar-powered Boreholes is just to register Government’s commitment to the people of Kono and to the nation on how serious and committed the New Direction is to foster development in this nation.

“During one of my visits to Kono the market women asked the Government to help them with clean pipe-borne water and today we have just fulfilled that. Government will bring more things to the people of Kono,” he said.

He thanked the Ministry of Water Resources, the Mayor of New Sembehun Council, the contractor, and the executive of the market women and stakeholders who advocated for the water and for their cooperation towards the successful completion of the project.

He admonished the communities to take very good care of this water facility and take the project as their own.

The Vice President also launched the fund raising for the construction of a USD50 million ECOWAS funded Kono District University of Science and Technology project. He told his audience that this is the start of many developmental projects undertaken by the Government of President Bio in order to transform this nation.