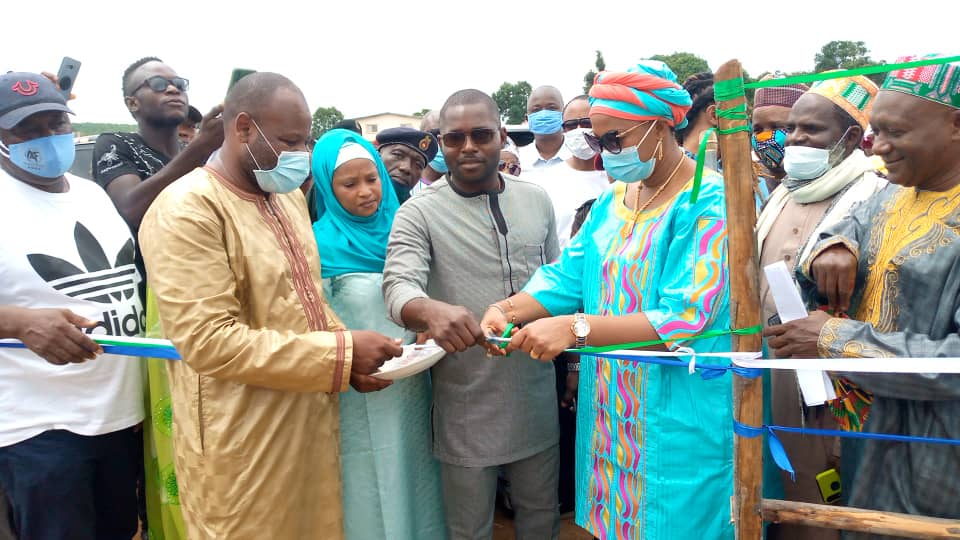 In what many have described as a laudable venture in terms of enhancing Water and Sanitation facilities in different parts of the country, the indefatigable First Lady of the Republic of Sierra Leone, Madam Fatima Jabbie Bio has commissioned some boreholes as part of the 100 boreholes project undertaken by the Bio Government in making pure and clean drinking water accessible to Sierra Leoneans nationwide.

During the commissioning and handing over ceremony of the solar panel borehole in Kono District, President Julius Maada Bio was highly commended for entrusting the project of such nature in the hands of a local contractor Issa Sanu Barrie who happens to be the Chief Executive Officer of an indigenous company known as Hadissa SL Limited.

Hadissa SL Limited was disclosed as an indigenous company that specializes in the construction of modern system boreholes with solar panels.

The commissioning and handing over ceremony of the solar panel borehole took place on the 11th October,2020 at the complex of the Ansarul Islamic Primary School in Koidu City.

The aforementioned school  was where the current First Lady, Madam Fatima Jabbie Bio, started her primary education and this development was categorised as part of her commitment and effort in give back to the school.

What came out clearly during the occasion was that the First Lady had earlier made a promise to ensure that the school be availed with a borehole which will make it easier for pupils to access pure and clean drinking water. She kept to her promise. That unflinching actualization of her promise was re-echoed by different speakers who in their presentations bestowed the honour to President Julius Maada Bio and his wife. They maintained that if only other influential personalities could follow suit then such will help greatly in minimizing poverty.

The shower of commendations did not only go to the President and First Lady as the Minister of Water Resources, Hon. P .K Lansana was also recognized for his tremendous work as well as his experience in the water sector.

The project’s supervising agency, SALWACO, also bagged thumps up as the implementing agency of the Ministry of Water Resources.

Delivering a short address, the CEO of Hadissa SL Limited expressed thanks and appreciation to President Bio and his Government for giving him the opportunity to serve his country.

‘‘I want to start by thanking Almighty Allah for making it very possible for me to stand in the presence  of our country’s most admirable First Lady ever to deliver a statement on behalf of my company’s execution of an excellent job right in my birthplace place .

I feel very blessed again today to witness the commissioning of an accomplished job by two of our country’s greatest personalities,  first at Gbenseh market by our Hon Vice President Dr. Mohammed Juldeh Jalloh and now here at Ansarul Islamic Primary School where I started Class 1 by Her Excellency the First Lady, Madam Fatima Maada Bio.

I also want to extend my greatest gratitude to the MWR, under the leadership of his Excellency, for entrusting my company to pre-finance this project and the Minister’s continued support in redirecting this project to its implementing agency, SALWACO. Under their professional supervision I can proudly boast that my company is fully ready to hand over all 100 completed solar panels borehole against December 2020.

Her Excellency, the system you are about to commission today is a borehole system powered by a solar submersible, pumping into a 20,000 litres storage tank with 15 stand posts supplying up to one mile radius with pure drinkable water.

Inshaa Allah, this is one of the many that my company is in readiness to hand over to the SALWACO in the next day’s/weeks in all 14 districts including 11 more in Kono district.

Madam First Lady, may, I also applaud His Excellency President Julius Maada Bio for his Government’s commitment for supporting the Local Content Policy.

On behalf of my company Hadissa SL Limited, I want to thank you Madam Fatima Bio and assure you that the availability of pure drinkable water you promised to this community is now ready.

I pray that Almighty Allah continue to look after you and your husband His Excellency President Julius Maada Bio”.