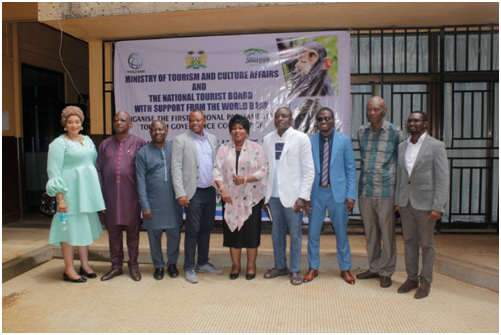 Media practitioners were, on the 15th June, 2022, during an engagement  informed by the Ministry of Tourism and Cultural Affairs and the National Tourist Board that, with support from the World Bank,  the first National Tourism Parliamentary Governance conference will be held at  the Galliness Paradise in Bo City from the 17-18 June, 2022 on the theme: “The Role of Parliament in the Development of Tourism and Culture in Sierra Leone”.

The two-day conference which will be attended by all the Parliamentarians, including the Speaker of the House is aimed at deepening the knowledge and understanding of the role of parliamentarians towards helping the tourism sector overcome its prevailing challenges, enact favourable legislations, seek requisite support and collaboration of MDAs and entice key players at all levels of society to support the sector.

The conference will also attract speakers and presenters from different MDAs in the area of investment opportunities and asset, hospitality and law, development of SME’s, cultural heritage, marketing and promotion among others.

Mohamed Jalloh, the Director of Tourism mentioned that the tourism sector is a multi-faceted, multi-sectoral and multi-dimensional industry that requires the collaboration and contributions of plethora of sectors and players in ensuring a holistic and comprehensive development of a destination. He said they intend to familiarize parliamentarians on the framework for tourism development and their respected roles to contribute towards the empowerment of the sector.

Chairman of the Parliamentary Oversight Committee on Tourism and Culture, Hon. Tom Tucker thanked the Minister for her strides in uplifting the sector. He applauded the Ministry for considering the role of parliamentarians in the development of tourism saying that what will be discussed in Bo will be beneficial to them and their constituents. He said they are all eager to attend such a remarkable conference as it complements their roles as Members of Parliament.

In her remarks, the Minister of Tourism and Cultural Affairs, Dr. Memunatu Pratt said they have held the tourism governance framework which articulated the responsibilities and functions of all arms of Government in ensuring that tourism thrives, a reason they are embedding tourism in all levels of governance.

She told the press that the essence of bringing Parliamentarians together is for them to share a common platform and think critically on the improvement of the sector.

The Minister added that the conference will alleviate the long-standing challenges of the sector especially as it concerns the enactment of laws that deals with tourism.

She informed the Press that she has got the most standing reception from Parliament while disclosing that the Speaker of Parliament will be the keynote speaker of the conference and that they will use the conference to re-launch and exhibit the Explore Freedom logo with the Parliamentarians.