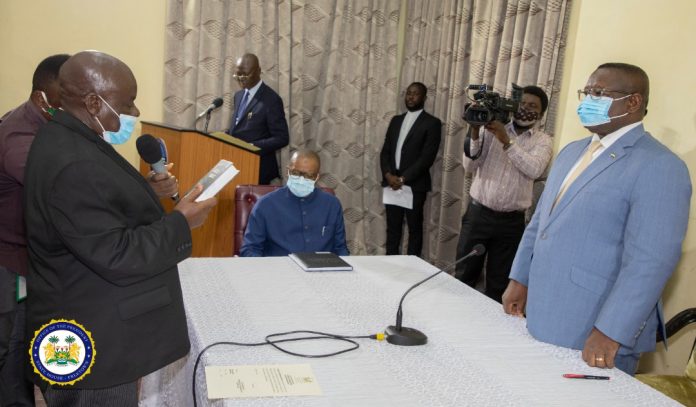 At State House on Tuesday July 7, 2020 the new Attorney-General and Minister of Justice, Anthony Yehwoe Brewah, Esq. subscribed to the Oath of Office at State House before His Excellency President Julius Maada Bio in accordance with the laws of Sierra Leone.

President Bio congratulated Anthony Yehwoe Brewah, Esq. on his appointment and reminded him of how daunting his task was. He said that they wanted to do quite a lot in the justice sector and noted that he had no doubt in the new Attorney-General having lived his whole life in the sector.

“We need to make access to justice as easy as possible. We are going to depend on you to lead that process. You have my full support and I wish you the best tenure of office,” he said.

In his response, Brewah, Esq. thanked God and His Excellency the President for the elevation and favor. He said that he would draw from the numerous support and networks he had created throughout his legal practice and assured of his best in the execution of the duties and functions of the office.

It could be recalled that during late evening of the 6th July 2020 it suited the President, by the powers vested in him by the 1991 Constitution, to appoint Lawyer  Anthony Yehwoe Brewah as the new Attorney General and Minister of Justice. Lawyer Brewah will now become the third holder of that position in the two-year of the Bio-led political administration.

The appointment of the new Attorney –General and Minister of Justice came in the wake of his predecessor, Priscilla Schwartz, being the country’s first female Attorney General, losing a treason trial against former Defence Minister, Palo Conteh, who is a very strongman of the main opposition All People’s Congress Party.

The new Attorney General is not a stranger in the SLPP New Direction political dispensation as he was first appointed as Minister of Local Government but was relieved less than a year in office. According to sources at State House, the President requested Priscilla Schwartz on Monday morning to resign but failed to do so until she received a letter stating how she has been replaced.

According to a school of thought her sacking as Attorney-General and Minister of Justice cannot be unconnected to her making series of legal blunders, reaching a crescendo when she decided to charge the former Minister of Defence, Retired Major Palo Conteh, with treason without substantial and convincing evidences, thereby portraying the entire Government as one that was desperate to hound key opposition APC key political figures. Palo’s case ,in fact, drew criticisms from different quarters when his close friend, some calling her his wife, was subjected to incarceration and embarrassment for days running in relation to the same treason case.

After four months of investigation, trying to make the evidence fit the thirteen counts of treason filed against Palo Conteh and a High Court trial the Jury, in the final analysis, found Palo Conteh not guilty of treason.

It is further argued that what could have been so frustrating for the Government was that despite the Defense Counsel representing Palo Conteh pleaded in court for the Attorney General to withdraw the treason charges, so as to save unnecessary waste of tax payers’ money, she was obdurate and convinced the President that she was going to find Palo Conteh guilty of treason.

For the Government to boot her out was what some have said could the right action to be instituted by the President against her otherwise she would have continued to mislead the Government with faulty legal advices in the future. Priscilla Schwartz will go down as the first Attorney General to be sacked within days of losing her first high profile, politically sensitive case for a sitting Government of Sierra Leone.

Brewah, Esq. is a Senior Legal Practitioner, Notary Public and Founder of one of Sierra Leone’s leading law firms – Brewah & Co. As a pioneer student of the Sierra Leone Law School, he has contributed immensely to legal development in the country. He is an accomplished lawyer with almost 30 years experience as a Barrister and Solicitor of the High Courts of Sierra Leone.

He was bypassed for the post of Attorney General when President Bio announced his first cabinet, after winning the presidential elections in 2018. He was instead appointed as Minister of Local Government but was then relieved by the President shortly after his appointment. He is said to have acted as lawyer for President Bio and the SLPP party during their days in opposition. 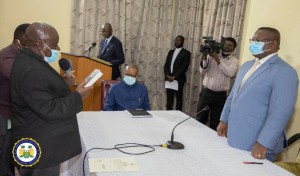