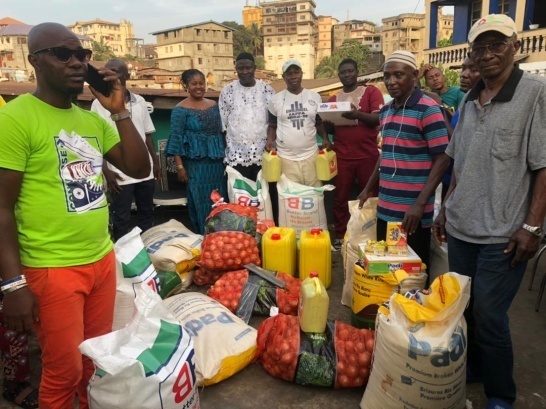 The Sierra Leone People’s Party (SLPP) Chairman of  Constituency 125 in the Western Area, Alhaji Komba on the 29th of April 2022 donated food items to Muslims who were fasting during the Month of Ramadan from which over 600 Constituency Executive members,  Zonal Heads, members and supporters of the ruling SLPP benefitted as well as engaging them in a constructive dialogue vis-avis the forthcoming 2023 General Elections.

Chairman Alhaji Komba thanked all of  them for their tireless efforts in portraying the aspirations of the party not only within his Constituency but at the national level as well .

He assured the members and supporters of the party that his election in April 2021 was no mistake disclosing how  his task as the youngest serving Chairman of the party in the Western Area is to disseminate the good works of  the Government led by President Bio in order to create an impact difference aimed putting the party in a good stead as against the upcoming Municipal, Parliamentary and Presidential elections in 2023.

He intimated how since his appointment he has received mammoth support from his respective party members including the Women’s wing which, according to him, has brought a new political flavor that signifies total victory for the ruling SLPP party in Constituency 125.

Chairman Alhaji Komba also underscored his firm belief in the trust given to him maintaining that together with other members of the party they are determined to change the political scenario of a dumping Constituency to one that is worthy of emulation by others.

He said by achieving such his party members have demonstrated unity among themselves in show casing President Bio’s exemplary strides since he was elected into office.

Komba said the integrity of Sierra Leone as a leading nation that had the first University, first Sea Port, first Municipality and first Judiciary in British West Africa has been bastardized by certain political leaders  who were not sincere to further push Sierra Leone into a better future .

He encourage his colleagues not to hesitate in  giving a positive image of the four (4) years in governance of the Bio led Government which, he said has seen a dramatic shift from old and outdated philosophies to new ones that are impressive  to  both local and International Communities. He ended up assuring all that his party will emerge victorious again in Constituency 125 come 2023.