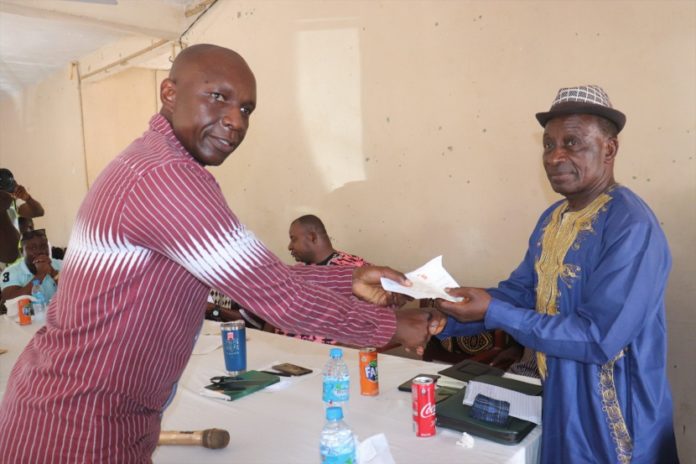 Seawright Mining Company (SMC) has on the 5th May,2022 ,for the second time now,paid the sum of eighty thousand US Dollars ($80,000,00) as surface rent to Gbense, Tankoro and Kamara Chiefdoms within the  Kono district and donated 200 bags of 50kg rice.

During a colourful ceremony at the Native Administrative Barry in  Gbense Chiefdom, SMC Chief Operating Officer (COO), Jabulani Mkoko, presented the cheques and bags of rice to the Chiefs in the presence of stakeholders including the Member of Parliament,  a representative from the Office of National Security (ONS), youth representatives, civil society, women representatives, officials of the Anti-Corruption Commission (ACC), Ministry of Mines and Mineral Resources and National Minerals Agency (NMA) among others.

The payment was for SMC Boroma Concession, on which the Company will undertake large scale diamond mining project in the Gbense Chiefdom, which hosts 80% of the concession, with a slight concession spilling to Tankoro and Kamara Chiefdoms in the Eastern Region of Kono.

In analyzing the payment plan, the SMC Chief Financial Manager, Osman Kamara, disclosed that the total surface rent paid was $ 80,000. 00 (Eighty thousand US Dollars) paid in the Leones equivalent, using the current Bank of Sierra Leone exchange rates to the three chiefdoms.

Following the surface rent laws of NMA, the payment was divided into 5 portions for the three chiefdoms:

The Hon Member of Parliament for Constituency 028 ,Hon. Sahr Charles, described the event as a landmark occasion to stakeholders of the three Chiefdoms because Seawright Mining made a huge investment in that Chiefdoms by making huge starts in its development strides.

He also stressed that the distribution of the surface rent is mostly for the benefit of an organization and not for any single individual.

The Regional Engineer of the National Minerals Agency (NMA), Ing. Daniel Lavalie spoke about the establishment of NMA which according to him is to develop the mineral sector for it to benefits the citizenry.

He said SMC is one of established companies that is helping to uplift land owners through its annual distribution of surface rent payments  expressing the hope that stakeholders will use the distributed funds for the right purposes.

He emphasized that SMC has made huge investments in the mining sector within Gbense Chiefdom, Kono district and the country at large.

He said what SMC has done demonstrates cooperation, peace and unity and spoke of the assistances that the company had rendered and is still rendering to them.

Chief Aiah M. Kamanda appealed to SMC to open an office in Koidu City for easy access and for them to make provisions for more stakeholders to be gainfully employed.

In his remarks, before presenting the cheques, SMC Chief Operating Officer (COO) Jabulani Mkoko said surface rent payment is by law but underscored that there is no direct benefit going to the community and because of that they decided to donate  200 bags of rice to the community residents  for them to enjoy part of the benefits.

He disclosed that SMC has already started moving their equipment to the site for them to start operations in earnest.

“We have finalized the mine plan and soon the implementation will begin to take place. You will start seeing an increase in drilling and infrastructure activities on site which means an increase in employment opportunities for the youth,” he assured.

Statements were also made by the Anti-Corruption Commission representative, Alpha G. Koroma, Civil Society Organization representative Alusine Kargbo and the Local Unit Commander, Tankoro Division Musa B. Kargbo among others.