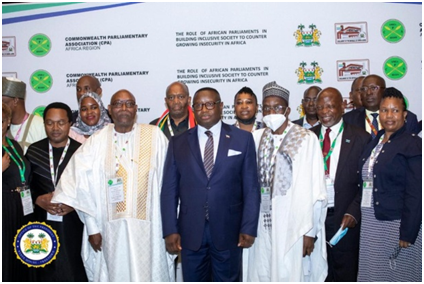 During the 52nd Commonwealth Parliamentary Association (CPA), Africa Region Conference which commenced in Freetown on the  6th June, 2022 at the Freetown International Conference Center, Aberdeen, the Deputy Speaker of the Fifth Parliament of the Second Republic of Sierra Leone, Hon Solomon Sengehpoh Thomas, joined the Leaders of Government Business, Hon. Mathew Sahr Nyuma and the main opposition All People’s Congress (APC) party, Hon. Chernor Ramadan Maju Bah, at the opening ceremony, to present an award to President Julius Maada Bio.

The President addressed lawmakers from across Africa, meeting as a Commonwealth Parliamentary Association (CPA) and used the occasion to congratulate Queen Elizabeth II of the United Kingdom on her Platinum Jubilee.

“I must add that the strengths of our democracies in the Commonwealth have endured, thanks to the role of Parliaments. You debate, modify, adopt, and pass legislation on policies, positions, and visions. You are tasked with voicing diverse views and approving the aspirations of citizens. That is no mean task.

“Let me hasten to say, on this platinum jubilee of Her Majesty’s reign, that I and the people of the Republic of Sierra Leone, wish to commend and congratulate the sovereign of our Commonwealth of Nations for her selfless, steadfast, caring, and inspirational leadership over the last 70 years,” he said.

He further noted that with the theme of the conference being,  “The Role of African Parliaments in Building Inclusive Society to Counter Growing Insecurity in Africa”, he was keen on how African Parliaments could support the building of inclusive societies.

“How can they support legislation that narrow social, economic, and political gaps? How can they create and support agile and responsive laws that promote equal opportunity and access? How does parliamentary work support the building of inclusive, resilient, and sustainable societies? To my mind, therefore, Honourable members, distinguished ladies and gentlemen, these questions should constitute the staple of discussions over the next couple of days,” he said.

In his goodwill message, Secretary-General of the CPA, Stephen Twigg, commended the President’s strong commitment to universal high-quality education and stated that the forthcoming meeting in Rwanda would provide an opportunity for Commonwealth to reset their shared commitment to education.

The Chairperson of CPA, Africa Region’s Executive Committee, and Speaker of the National Assembly, the Rt. Hon. Justin B.N. Muturi, through his representative, expressed gratitude to President Bio for his clear illustration of commitment and support to the ideals of parliamentary democracy, which their organization sought to achieve.

He disclosed that the CPA Africa Region had also spearheaded efforts to change the association’s legal status from a charitable one to an international organization.

Speaker of the Sierra Leone Parliament and President of CPA Africa Region, Rt. Hon. Dr. Abass Chernor Bundu said they had come together as an international community of Commonwealth Parliament and legislatures working together to enlarge and deepen commitment to the highest standards of democratic governance, gender equality and equal representation.

“No time is more auspicious for Commonwealth Africa to meet in Freetown than now that the Queen Elizabeth II of the UK is celebrating the platinum jubilee of her reign. Sierra Leone has long been an enduring symbol of Africa’s history and spirit, its continuity and endurance, its vitality and resilience.” 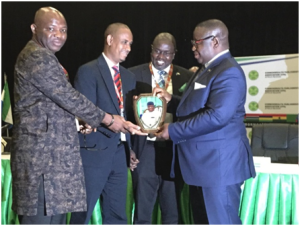 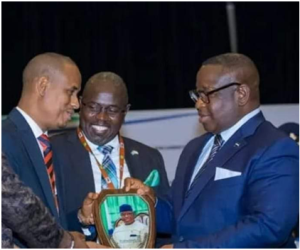