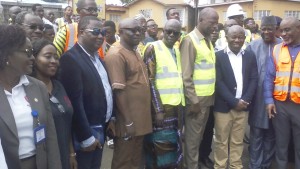 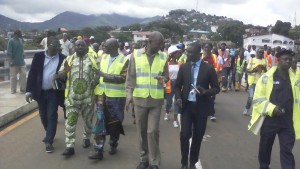 officially authorised the use of the newly constructed Atlantic-Lumley Bridge, which was constructed by a Sierra Leonean owned company, SeCon; but he was quick to state that this is not the official commissioning of the bridge. That will be done by the President after the whole project has been fully completed.

Speaking during the ceremony, Minister of Works, Peter Bayoku Conteh stressed that the bridge project undertaken by SeCon has not been fully completed, but as a substantial area has been completed and cries from the public to use the road continue to mount in respect of the easing of the traffic at Lumley, he is only giving authorisation for the use of the road from Atlantic to Lumley via the bridge, but that after completion of the other areas included in the contract, which involves the road to Crab Town, the entire project will be commissioned by President Bio. He observed that there are still work to do to beautify the bridge and the provision of light along the route from Lumley to Atlantic, so as to safeguard residents and users at night.

Minister Bayoku stressed that Sierra Leone now has a government that is passionate about bringing development to the country. The government, he maintained has vowed to promote local content and will do all in its power to ensure that contracts are awarded to local companies, but maintain that it will not support any group or individual who is a crook. Government is determined to improve the roads and sooner than later Sierra Leoneans will take possession of all development projects in the country.

Bayoku Conteh further stressed that during his tour around the peninsula, he noticed a lot of makeshift sharks (pan bodi) along the right of way. These he added are being used by criminals for various criminal activities and intimated that he will soon authorise the demolition of all such structures along the road. The country, in his opinion, now has a very good administration in the ministry and expert personnels in the SLRA board, with an expert as chairman and competent engineers. These will ensure that the road projects scheduled to be done with the available resources will be done perfectly. He further stressed that the government of President Bio is a talk and do government and whatever they promise to do, that they will do before the President’s term of office ends.

SeCon’s CEO, Papa Chendeka, expressed appreciation to the government for giving Sierra Leoneans the opportunity to do Sierra Leonean work and praised the SLRA for the technical cooperation offered during the project from the drafting to the stage in which it is now and to Cemmat, the consultants, for their technical advices to achieve this feat.

He stressed that the work done so far is a manifestation that Sierra Leoneans are also capable of doing quality road works and urged the government to award more road contracts to indigenous companies, adding that when money is paid to them the money is not taken out of the country but also boosts its economy.

The Atlantic-Lumley Road Project, he said, cost Le29 billion and assured the government and all Sierra Leoneans that SeCon is ready and determined to continue to do quality work for the nation. He praised the Sierra Leone Commercial Bank (another indigenous banking institution), for their service during trying times.

RMFA’s Director in his own contribution said that they have the mandate to do payments to contractors on the authorisation of the Ministry of Finance. He expressed happiness at the work done by SeCon adding that evidences like these are value for money. SLRSA’s David Panda Noah maintained that he is happy to witness the work done by the company, as it will further enhance their work and reduce the number of personnels deployed on the streets to handle traffic congestion and ensure safety of citizens. This free flow will be good for all. AIG Senessie of the Sierra Leone Police also expressed satisfaction in seeing the road completed and promised to continue their work with the SLRSA. He advised all citizens to observe the law.

Hon. Ibrahim Tawa Conteh of Constituency 132, where the beneficiaries of the project reside, also joined others to praise SeCon for a wonderful work done and further appealed to the minister of works to consider other roads, especially those in Kaningo namely; Sheriff, Momoh and Minah drives. They are badly needed by the over 11,000 constituents living in that area.

Charles Mambu, Chairman Roads for Development, also expressed similar sentiments, adding that road works is part of the recommendations made in respect of infrastructural development of the country and heaped praises on SeCon for the transparency it has shown in displaying the cost of the road project on a sign board erected on the site. This is what they had requested that all road construction companies do.

The ceremony was climaxed by a tour of the bridge by all the dignitaries and stakeholders from Juba/Lumley to the Atlantic Junction at Beach Road.