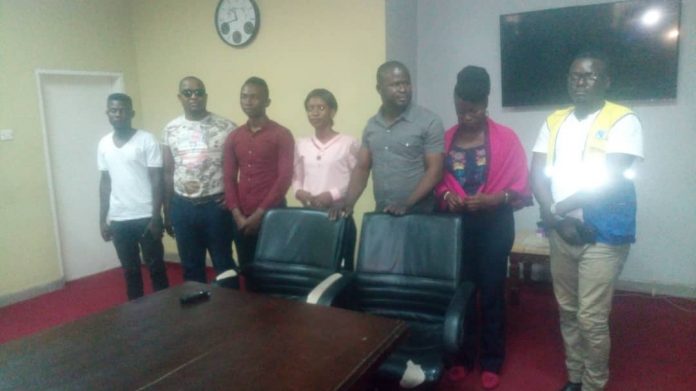 The African Young Voices (AYV) on Thursday 17th January 2019 hosted a Press conference at its Tower Hill headquarters in Freetown. It was organized by its Current Affairs Unit, where it vehemently condemned the attacks on its Northern Bureau staff by a group of persons clad in APC gears and believed to be supporters of the main opposition party, during a visit by the CID on the residence of former President, Ernest Bai Koroma, in a bid to take a statement from him in relation to a Press Release issued in December by the party, which the Police viewed as inciting.
Speaking during the briefing, the Northern Bureau Chief of AYV, Amadu Kamara, explained their ordeal with some alleged supporters of the APC on 16th January in Makeni.
He disclosed that prior to their arrival at the residence of the former President; they engaged the Deputy Organizing Secretary of the APC, Alpha Apazo Kamara, on their desire to cover the said visit. They were told by Alpha Kamara that they will not be allowed into the compound, but can hang around the vicinity of the gate and do their coverage. This, Amadu Kamara said they did. Whilst carrying out an interview with supporters of the APC on their reaction to the visit of the CID to their Chairman’s residence in his strong hold, they were approached by the Deputy Organizing Secretary, who then asked them what they were doing in the area and ordered them to leave.
Amadu said that Apazo then stated to the hearing of those supporters around that the journalists were SLPP and were forcing themselves on APC activities. Upon hearing the utterance of the Deputy Organizing Secretary, the crowd of supporters then pounced on them beating and physically manhandling them and their equipment. He stated that several of their equipment was damaged and phones missing, whilst 2 female reporters and a male camera man were beaten.
Amadu further disclosed how the former Ambassador to Iran in the last administration, Alimamy Kamara, prevailed on their assailants leading to their rescue from the mob. Amb. Kamara then escorted them to their offices in Makeni. Whilst at their offices, they were again attacked by some 50 Okada riders who threw stones at the office in the presence of the ambassador. At this juncture, the Northern Bureau Chief said that he advised his staff to go home for their own security as it was apparent that they were no longer safe there.
Amadu further explained that an official statement was made to the Makeni police and medical forms given to the victims for medical attention.
In his own contribution, the Head of Current Affairs Unit at AYV, Samuel Wise Bangura said that this attack on AYV staff has become the order of the day and must stop. He recalled during the elections when Mariama, another AYV reporter was attacked along Wilkinson Road whilst covering the elections, by people believed to be APC sympathizers and another incident at the APC headquarters in Freetown, where some members of their Press in AYV flash jackets clearly identifying their institution, were again attacked by APC supporters. This trend, he stressed, must stop. He underscored that today it is the AYV; tomorrow it could be another press house. Whilst today it is the APC, tomorrow it could be the SLPP or any other political party. The AYV, Samuel Wise pointed out is non-political and has no affiliation with any party. They are simply disseminating the news as it is happening across the country, he added.
Speaking on behalf of the President and CEO of AYV, Abdul Fonti said that the institution is pursuing 3 approaches namely; engaging the leadership of the APC on the incident, engaging the Sierra Leone Association of Journalists (SLAJ) and if possible taking legal action against the party. He stated that they have in their possession video evidence of the whole attack. Finally, they are going to give the APC an ultimatum which may include a news blackout on their activities until a favorable outcome is arrived at.
Victims present at the Press Conference were shown to the public and a question and answer session climaxed the event.