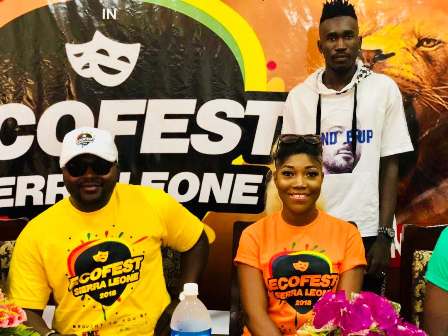 There is no force potent enough to promote a country’s image than its entertainment industry. For this reason, Sierra Leoneans from all walks of life are now relishing the prospect of another opportunity to re-brand Sierra Leone through the highly anticipated November 30th – Ten Nations ECOFEST music showdown at the National Stadium.

Those who witnessed last year’s edition of the epic show saw how popular Ghanaian rock star, Kuami Eugene made an impressive display of love and affection for Sierra Leone by persistently waving the National Flag  in front of international TV cameras, exclaiming; “Sierra Leone to the World!! Sierra Leone to the world”.

That part of the show was repeatedly shown on top television networks around Africa and it significantly portrayed Sierra Leone as a peaceful and attractive country with a thriving entertainment sector.  This message will be re-echoed far and wide and the rewards to our tourism industry will be huge.

Many are now of the opinion that Kuami’s performance that night  had ignited the interest of so many top international entertainment stars like Tanzania’s Diamond Platinum, Uganda’s Jose Chameleon, Nigeria’s Slim Case and the ever popular stand -up comedian, Basket Mouth. These stars and several others will be joining Sierra Leonean artists for another major ’marketing assault’ for Sierra Leone at the National Stadium.