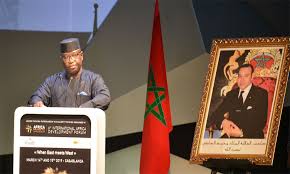 During the 6th International Africa Development Forum (FAID) held on Thursday 14th March 2019 at Casablanca in Morocco, President Julius Maada Bio commended the sound commitment and the sustained efforts made by King Mohammed VI for the development of the African continent.
Addressing the opening session of the 6th International Africa Development Forum (FIAD), on Thursday in Casablanca, President Maada Bio said Morocco is a “success story” in Africa, noting that the Kingdom shares its experience with African countries in various vital sectors to speed up their socio-economic development.
Morocco “must be proud of its long history, centuries-old tradition and take pride in its real commitment that inspires hope as well as its development agenda for the continent, which deserves to be followed”, said President Maada Bio, whose country is the guest of honor of the business and development event.
“The African continent, which has enormous potential with a population of about one billion people and diverse natural resources, offers investors huge business opportunities in infrastructures, agriculture, renewable energies, tourism…”, he added.
FIAD 2019 aims to promote African trade, investment and south-south cooperation. It seeks to bring together and connect economic operators from African countries to explore partnership projects underpinning Africa’s economic potential.
The International Africa Development Forum has become a flagship platform on the continent for political and economic debates for Africa’s development.
The sixth FIAD is held under the theme “when East meets West.” Organized by the Moroccan Pan-African investment fund Al Mada, of Attijariwafa bank Group. The two-day meeting is a platform for dialogue, investment promotion and intra-African trade development. It is gathering dozens of African countries as well as thousands of business people from the continent and from around the world.
The 5th edition saw the participation of 7,500 business people from 36 countries.