Freetown,Thursday, September 26th 2019: On Thursday 26th September,2019 395 employees from Bolloré Group Sierra Leone took part in  the 4th edition of the Marathon Day. This internal sporting event was created by Cyrille Bolloré, CEO of the Bolloré Group, to raise every year, funds for charity organisations.

For over 60 years, SOS Children’s Village has supported children whose family situations have forced them to be housed elsewhere. It allows siblings to grow up together in a family-like environment, supported by an educational and effective long-lasting relationship in link with a family educator (the “SOS mother”). Beyond its mission to host children, it also develops programmes to promote access to education, professional training and healthcare. Furthermore, it works to strengthen family ties and prevent abandonment.

Bollore Group in Sierra Lone with it subidiaries; Freetwon Terminal Limited (FTL) Bollore-Transport-Logistics (BTL), Sea and Land Services (SALS), Sierra Leone Shipping Agency (SLSA) have over the years spent over $150m on investments to advance the operation of the company to international standing. Our records on human capital and capacity development are well documented; the company has invested the sum in tune of $1m.

We remain commited to fulling our coperate social responsibilities which we have been doing since we started operation; where some of our visibile presence were during the ebola, the mudslide, series of fllodings that have taken place in freetown and also targeting surrounding commuities in our operational areas where we mostly give out scholarship, give donations and do intervention when necessary.

Just last year the company opened the new berth that cost $120m. This was to ensure Sierra Leone join the club of countries with portss of international standing. 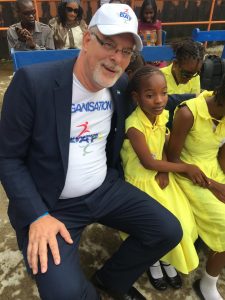 Country Manger for Bollore-Transport-Logistics in Sierra Leone Cpt Fabjanko Kokan said while handing over donation to Milton Margai School for the Blind and Deaf and Dumb that ‘’We are a company that believe in gving to humanity; and coming here to give this little support is a humbling experience’’

In October 2009, National Commission for Privatization (NCP) commenced a competitivebiddingprocess for the concessioning of the container terminal at the Queen Elizabeth II Quay.

Bollore of which Freetown Terminal is a subsidiaryemerged the successfulbidder and eventuallyenteredinto a concession agreement with the government of Sierra Leone in 2010 granting the company the right to operate the container terminal.

Howevertherehad been addendumsto the concession agreement gearedtowardsamending relevant sections of which addendum number 4 signed in September of 2015 contained the development of a new berthwith a length of 270 meters and a draught or depth of 13 meters, with the installation of modern port equipmentthatinclude 2 Ship to Shore cranes and 4 Rubber Tire Gantry cranes for effective operationat the port.

Also in the addendum, the government of Sierra Leone wasgranted to be an equityowner of 20% shares in the company. For the construction of the 270 metersBerthcosting $120 million Bollore-Transport-Logisticswilloperate the container terminal until 2041.

To date, the companyisemploying about 20 thousand people directly or indirectly

ABOUT BTL AND SALS

BOLLORE TRANSPORT AND LOGISTICS formerly known as SIERRA LEONE SHIPPING AGENCIES LTD was registered in Freetown in 1974 as a Shipping Agency and it remain the biggest shipping agency in Sierra Leone. Bollore-Transport-Logistics is the biggest agency network in Africa with head office in Puteaux, France.