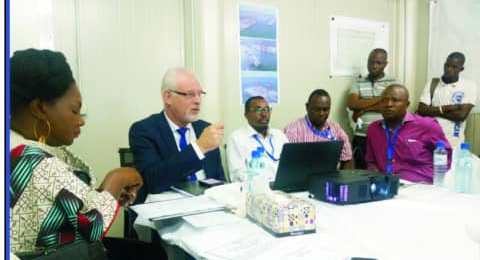 The Management of Freetown Terminal Sierra Leone, a subsidiary of Bollore Group, yesterday 6th February 2019, briefed journalists on its development activities in the country and the progress made since the company started its major extension of the port which has helped to ease the pressure of doing business at the Quay, although there is room for further improvement.
Whilst the meeting widened the communication channel between the company and the Press, it also served as a corporate accountability forum to channel information of its development activities to the public.
In his opening remarks, Bollore’s country Manager Cap.Fabjanko Kokan said that Bollore has over the years witnessed a lot of successes but was quick to note that there is still room for improvement.
He expressed his company’s willingness and commitment to continue working with the Government and the people for Sierra Leone for improved infrastructure and economic development of the life and conditions of living of the people.
Giving a brief history of Bollore, the Country Manager said the company has been in existence since 1822 and will be celebrating in three years time, its two hundred years of existence. Capt. Kokan said Bollore is in operation in 102 countries around the world, and 45 of this number are in Africa, the rest are in Europe, Asia, Central America as well as ‘our latest biggest in a container Terminal in Ghana amounting to 1.5 billion dollars’.
He stated that the Ghana container terminal could handle three million seven hundred containers in contrast to the 55,000 in the Freetown Terminal
“We are a company that believes in undertaking joint ventures in the countries we operate, as we believe in partnership and we are not competing, but working together for the development of the country,” he went on.
He also explained that Bollore has never closed its operations during trying times like the Ebola underscoring how when other companies left, it stood the storm.
Speaking on the Port concession of the Freetown terminal limited, the Country Manager explained that it was signed in 2010, ratified in 2011 and an addendum to the expansion added and signed in 2016 giving the government 20% shares.
After the initial signing of the concession agreement in 2010 and the commencement of operations in 2011, a total one hundred and twenty million dollars was spent on the port’s expansion.
He said the company has a track record of improving on the safety of its workers and customers for the past five years highlighting how Bollore has spent over 15 Billion Leones on the aspect of medical and safety measures.
He however stated that 6 Sierra Leoneans are occupying top management positions in the company.
Abu Bakarr Sesay, Operations Manager of Bollore, said that with the intervention of the company with modern equipment such has helped in revenue mobilization and also made work easier and allayed the fears of customers. At first the minimum time of moving a container at the port was 21 days, because reliance was on the ship wincher and hired trailers doing offloading, but with the intervention of Bollore, the duration of the process has been reduced to less than a week.
Darrel Coker, Documentation Manager and Terminal Analyst, said they have just discovered that there are shipping bodies that do falsify the company’s invoice and increase prices to customers. This, he said, they have reported to the CID but called on the general public to always come to Bollore office to cross check saying “our doors are always open.”
Technical Director, Sylvester Ndour, said due to the company’s commitment to uphold the local content policy ,they always embark on serious training for local staff not only to operate their modern equipment but to maintenance them as well which is the most difficult aspect and the company is 80% successful in that direction.
Edward Kanu, Procurement Assistant, stated they always work with local companies in the area of supplies unless otherwise.
He also pointed out that the company has spent over 1billion Leones on Corporate Social Responsibility and recently other 1. Billion Leones was given as duty waivers to the Komboi Eagles Football Club from Kenema for the construction of an infrastructure at the Kenema Mini Stadium.