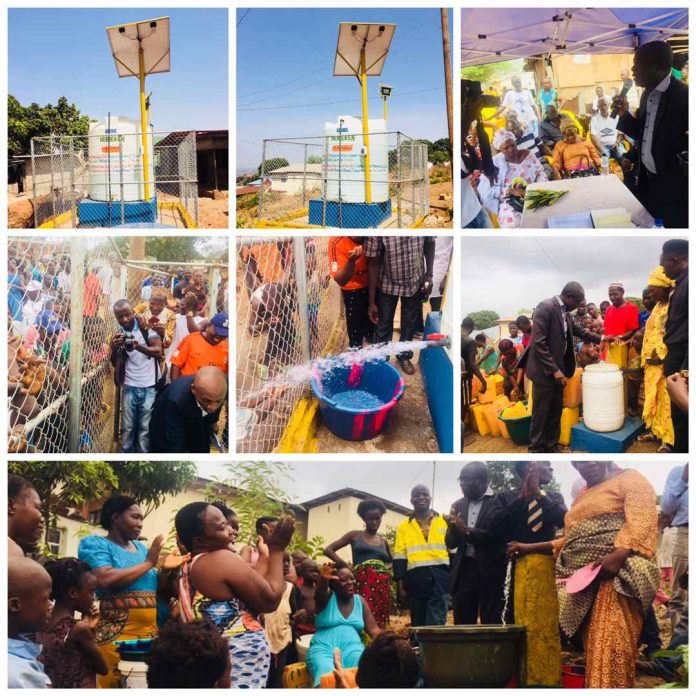 Sierra Leone’s foremost brewer of beverages, Sierra Leone Brewery Limited (SLBL) on Tuesday 30th April, 2019 commissioned 2 submersible solar-powered water wells in Kamara Town. This is the fifth out of seven that have been commissioned so far in the Wellington Industrial area.
Speaking at the auspicious occasion, SLBL Corporate Affairs Manager, Albert Ojo Collier, informed his large audience that the investment that Heineken Africa Foundation provided for the project amounted to EUR 69,458, which he said is over Le600M, of which EUR. 57,008 (which is Le503,653,325) has already been received and expended in the first phase for the construction work. He went on to say that the SLBL continues to play an important role in the social and economic growth of Sierra Leone through “our corporate social responsibility agenda, with the support of the Heineken Africa Foundation.” He added that the SLBL recently approved a new project for the support of an improved ultra sound maternity project for Well Woman clinic at Murray Town. He informed his audience that in the past four years, ‘we have traversed the length and breadth of these communities unveiling water and sanitation projects. This is to augment the availability of potable water supply and indeed to keep the taps running, especially to the water constrained communities, who previously never had adequate access to this precious service.
He called on Sierra Leoneans and especially those directly benefitting from the project to ensure they take good care of the facilities and report anyone found damaging or stealing from these facilities.
In his own statement, Councilor Mohamed Jean Tholley, explained about the challenges and sufferings of his people before the intervention of the SLBL. He thanked the sponsors of the project and promised that it would be well taken care of. He warned that anyone found damaging or stealing from these facilities would be arrested and prosecuted and if found guilty sentenced to jail term.
Other speakers were the Chief, Youth Leader, and the Member of Parliament representing the area, Hon. Alpha Amadu Bah, who commended SLBL and Heineken for the gesture. He urged the company to keep up with its good work, adding that SLBL has been a major contributor to the socio-economic stability of the country over the years.
The climax of the ceremony was the formal commissioning of the submersible solar-powered water well done in consonance with Albert Ojo Collier, Hon. Alpha Amadu Bah and others,