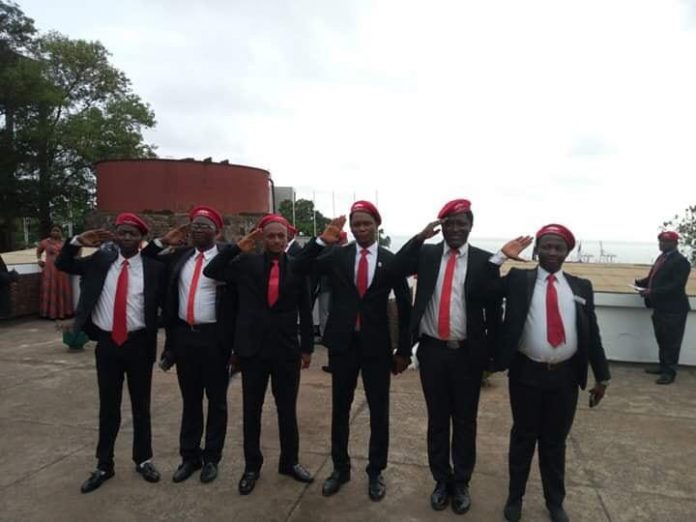 That there is something fundamentally flawed in the relationship between the ruling Sierra Leone People’s Party and the main opposition All Peoples’ Congress is becoming all the more glaring as the APC has again staged a walkout from parliament during the official opening of the 2nd session of the 5th Parliament by President Bio pursuant to the constitutional provisions.
When The Calabash asked one of the APC Members of Parliament, the reason for their walkout, he said they are tired and fed up with being bullied by the President and his government. Observers saw the APC MPs walking in the vicinity of Parliament with protesting placards in their hands.
Asked to elaborate, he said that as partners in governance with the ruling party, as well as the other political parties in parliament, the APC, he said, believes that the President and his government do not listen to the opposition, but have since the election of the speaker of parliament, rode roughshod over them.
“We cannot go on this way,” the disgruntled APC MP said, adding that in a democracy, the voice of the opposition must be heard by the government, especially when that opposition has the majority in parliament.
He furthered that both the President and NEC have so far failed to listen to their party’s demand for the NEC Chief Commissioner to resign, citing his alleged woeful conduct of the Kambia district council bye-election in Tonko Limba, which he said does not give APC trust and confidence in the current NEC leadership to conduct free, fair, transparent elections.
Whilst a good proportion of the population sympathizes with the APC, others have said that APC must understand that existing political tensions in the country cannot be resolved by staging walkouts from parliament every now and then. This they say, gives the ruling party a free hand to do just what it wants; as happened in the case of the election of the speaker and his deputy last year; as well as passing into law of the emergency Act.
“Boycott is not the way to solve problems and to express different opinions,” one Sierra Leonean living in UK said about the latest APC walkout from parliament.
“We understand APC’s struggle to enforce democratic values in the governance system,” the Sierra Leonean in London said, “we sense that the ruling party is cracking down on the opposition; we understand APC’s mistrust in the President and his government, however running away from the battle is not the answer.”
“Let APC take their grievances to the people through involvement with civil society, the media and international partners,” suggested one sympathizer, adding that, “In Africa generally we know that the party in power always behaves like a tyrant, but with the involvement of the people, civil society and the media, the party in power can be reminded of its role, responsibilities and limitations; failing which the people can always express their grievance against the party in power at the ballot box.”