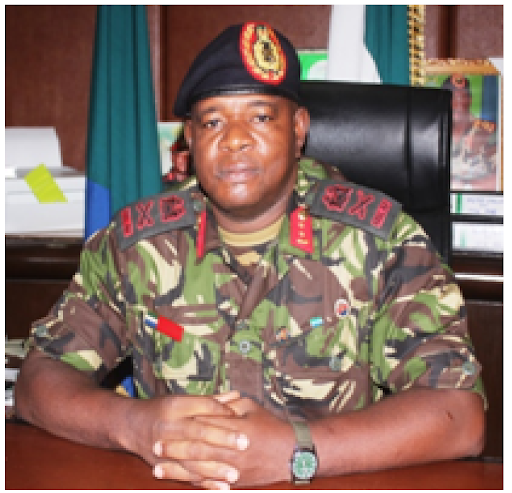 In an exclusive revelation, the Commanding Officer of the 12 Infantry Battalion Pebu in Kabala, Lieutenant Col. J.P. Koroma, has pointed out that he was not part of the riots that took place in Dalacuru on June 30th 2020 where a Chinli Mining Company vehicle was burnt down by disgruntled youths who alleged that their land has been sold to the Chinese in order to mine gold. “I am very much surprised to read articles and listen to audio messages on the Social Media that I sent  soldiers to Dalacuru to massacre unarmed civilians which  is not true,” he stated further adding that it was the youths in Dalacuru who beat up soldiers and wounded them.

According to him, had it not been for his professionalism in Human Rights ,which he has lectured his soldiers to respect, if not there would have been massive lives lost but no bullets was fired and  nobody killed. He explained that yet still people are saying his soldiers beat-up and massacred youths of Dalacuru during the 30th June 2020, riots. “My soldiers are in Dalacuru to protect the lives and properties of the Chinese including their mining equipments for them not to be destroyed.”

Chief Kali Koroma of Dalacuru openly apologized to Col. J.P. Koroma for the action of his youths appealing that such will not happen again.

According to Chief  Kali Koroma if the soldiers sent to Dalacuru were not professionals dozens of youths would have  been killed in cold blood. “While you were trying to make peace  I saw your soldiers were pelted with stones but please forgive us  and  don’t retaliate  as it  will not augur well,” said Chief Kali. P.C. Sheku Magba Koroma III adding that the youths have regretted their actions. He categorically made it clear that what happened in Dalacuru has political undertone saying some people he defeated during his Paramount Chieftaincy election are behind all these trouble in the Chiefdom of Diang.

According to P.C. Magba Koroma III, the Chinese are trying to bring development to Dalacuru but the  youths are causing trouble for themselves. He assured that there is going to be soldier and police presence to maintain law and order. “Very soon a 100 bed room hotel will be built in Diang Chiefdom which will create employment for the youths in the Chiefdom. It will attract tourism and tourists around Lake Sonfon. The Chinese will build a Self- Hydro Power in Diang Chiefdom,”P.C. Magba revealed.

“I am serving the Government of the day as I am not a politician,” he stated underscoring that Fasalie Tarawalie came to Diang Chiefdom through the right channel  and not the back door.

Councilor Francis F. Koroma of Ward 154 in Diang Chiefdom emphasized that as a Councilor there is the need for them to encourage investment  stating how he was the first person to hand over his artisanal licence to the Chinese through the National Minerals Agency (NMA).The town Chief of Dalacuru, Chief Kalil Koroma also  handed over his  artisanal Licence. He called on the youths to support the good work of the Chinese saying they mean well for the people of Diang Chiefdom.