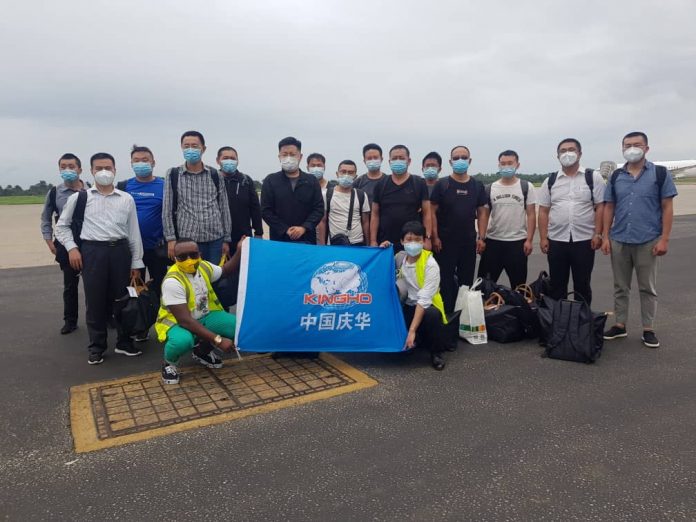 On Friday 17th July 2020, a group of expatriates from the Chinese owned Kingho Investment Company Limited jet into the country with the motive to revamp iron ore mining in the country’s northern district of Tonkolili. This good information came at the peak of a global pandemic which has ravaged economies of all countries across the world.

Led by the General Manager of Kingho Investment Company Limited, Gilbert Zhao, who together with others flew in onboard a private chartered Chinese flight, the team leader said they are in the country to boost the mining sector and also to boost Government’s revenue. He confirmed that Kingho Investment Company Limited is working on exporting its first (1st) shipment of iron ore from Sierra Leone latest by the 4th quarter (October-November-December) of 2020.

Speaking on arrival at the Freetown International Airport in Lungi, Gilbert Zhao thanked His Excellency President Julius Maada Bio, the Government and People of Sierra Leone for the confidence bestowed on them. He assured that going forward his investment company is keen on utilizing the local potentials of Sierra Leoneans thus creating a workforce of between two thousand (2000) to five thousand (5000) personnel. He added that his company will do everything possible to comply with all the laws relating to the local content policy in Sierra Leone. Hence, he said, some of the expatriates are sub-contractors who will utilize local Sierra Leone engineers and workers who would be privileged for training opportunities in Beijing, China.

Mr. Zhao further confirmed that the confidence they have in the Government of Sierra Leone is what gives Kingho Investment Company Limited the morale to invest at the restart period millions of United States Dollars into iron ore production in the country.

In addition, Mr. Zhao dilated that job opportunities will be created for every Sierra Leonean irrespective of gender, ethnicity, social origin or religion. He further assured that they will help Sierra Leone achieve more in terms of increased tax and revenue generation. He said for the first time Sierra Leoneans will benefit from Sierra Leone’s natural wealth.

Meanwhile, the places where the Kingho Investment Company Limited will be focusing on Iron Ore mining are Sambaia, Dansogoia, Simiria, Kafe and Tane chiefdoms all in the Tonkolili District of the Northern Province of Sierra Leone.

Also worthy to note is that Kingho Investment Company Limited is a subsidiary of China Kingho Energy Group with headquarter located in Beijing, China. It is seeking to successfully develop the Tonkolili Iron Ore Project in Sierra Leone.

Hence the reason why it has flown into the country a group of expatriates to revamp the Sierra Leone Iron Ore sector together with a whopping investment of millions of dollars.