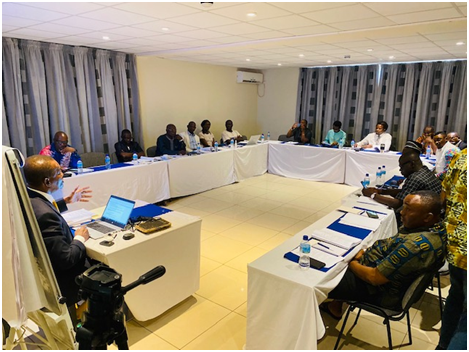 The Centre for Accountability and Rule of Law (CARL), with support from the United Nations Development Programme (UNDP), has on Saturday 11th June, 2022 concluded a two day retreat with the Legislative Committee of Parliament on the Criminal Procedure Act (CPA) draft amendment bill. The ceremony was held at New Brookfield’s hotel in Freetown.

In his address, the Executive Director of  the Centre for Accountability and Rule of Law (CARL), Ibrahim Tommy told newsmen that if the reviewed Criminal Procedure Act is passed into law it would have many positive effects on the lives of people because it would reduce overcrowding in  correctional facilities across the county and also would reduce the period use to try criminal matters in court and better regulate the power that Police have to arrest and detain people for everyone to enjoy his or her civil liberties.

Tommy said they organized the retreat with Parliamentarians because over the years, they have been working with stakeholders to make sure that they change or review the Criminal Procedure Act 1965, adding that the CPA of 1965 is the law that the Judiciary uses for all criminal matters in the country which gives the Police the right to arrest, detain and charge matters to court for trial and it also describes the procedure of the matter.

The CARL Executive Director said they want to change so many provisions in the CPA 1965 furthering how they have also looked into the area of Police because they have the power to arrest and detain in ways that are not regulated as it is supposed to be.

He said the law says the Police should arrest and detain persons for 3 or 10 days before charging the matter to court. Tommy said they have proposed for it to be reduced from 3 to 2 days and from 10 to 7days.

The Executive Director added that if someone is convicted for any crime, the sentence should be very limited wherein a fine should be imposed or send the accused to jail adding that in the absence of such there will be overcrowding in correctional centres and so in the CPA draft amendment bill they want to make sure that there is an alternative sentencing in the new CPA.

He called on the authorities to be committed to the CPA draft amendment bill because after the two days retreat, the final vision would be presented to the office of Attorney General and Minister of Justice. He also called on them to take it seriously in order to have the final bill that would be presented to Parliament so that it will be enacted into law furthering that if they really care about everyone in the country, they have to pass the reviewed CPA into law because it would introduce a lot of changes in the criminal justice sector.

“As part of this project, we would continue to talk about the on-going efforts but once we have the new law appreciated we would use a lot of resources to engage the media, community people for them to understand what the new provisions as well as conduct a lot of training for various stakeholders,” he assured.

In his speech, Chairman of the Legislative Committee in Parliament, Hon. Marray Conteh thanked CARL, UNDP and Justice Browne-Mark for the relentless work they have been doing over the years to make sure that they review the Criminal Procedure Act of 1965.
He said as representatives of the people, they are charged with the mandate to make laws, represent them and provide oversight functions.

He said they deemed the process as very important because it will help them broaden their understanding of the reviewed CPA and with that information they would be able to make the right decisions and pass laws that would stand the test of time.

“I believe that whatever we are going to discuss during the review would aid the debating process as soon as the bill reaches Parliament. I believe we have come a long way and I believe we are going to reach the finish line. As I always say, governance is an issue of acting, participation and total involvement of key stakeholders as we all need each other in the process and I believe that when we put our country first in platforms like this we would be able to make decisions that would be in the interest of our people,” he said.

During the two days retreat, Justice Nicholas Browne-Marke gave a general overview of the CPA draft amendment bill and presented it to the Legislative Committee of Parliament.