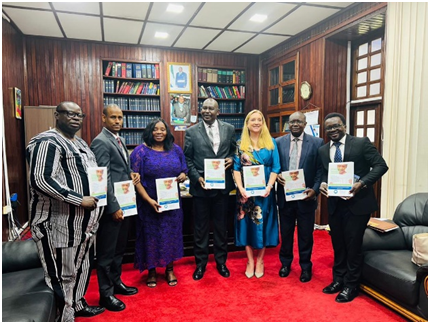 During a well-attended ceremony held on Thursday 10th November, 2022 at Chambers of the Chief Justice of Sierra Leone on Law Court Building on Siaka Stevens Street in Freetown, the Center for Accountability and Rule of Law (CARL-SL) with support from the Irish Embassy officially launched the study on Electoral Justice in Sierra Leone ahead of the 2023 general elections.

The objective of the study is to provide an assessment of the legal and structural environment for the effective administration of electoral justice and also seeks to assess the capacity of existing electoral dispute resolution mechanisms and make recommendations for reforms that may expand the opportunities for resolving electoral disputes.

Speaking during the ceremony, the Executive Director, Center for Accountability and Rule of Law (CARL-SL), Ibrahim Tommy, expressed appreciation to the Irish Embassy for their technical and funding support towards the project, adding that CARL and IGR are currently implementing a governance project in Sierra Leone and that as part of the project, CARL has produced a project, titled, “Strengthening Governance and Accountability Processes in Sierra Leone: A Review of Administration of Electoral Justice in Sierra Leone: Challenges and Opportunities for Reforms”.

He maintained that through this effort, they want to help build and strengthen an electoral justice system that resolves election-related complaints, guaranteeing full compliance with the law, and to help democracy in Sierra Leone thrive, furthering that the right to vote is not only a cornerstone of democracy, but it is also a right under both national and international law.

The Executive Director pointed out that Electoral Justice has a fundamental role in the continual process of democratization and serves as a catalyst for the transition from the use of violence as a means for resolving political conflict to the use of lawful means to arrive at a fair solution and outcome.

He said that they have also identified ongoing efforts to respond to the challenges that undermined efforts to access electoral justice in the last three electoral cycles(2007, 2012 and 2018) and the persisting challenges that need to be overcome ahead of the 2023 elections and they have made recommendations to the leadership of the Judiciary, ECSL, the Sierra Leone Police, the Ministry of Finance and the Parliament of Sierra Leone.

“Importantly, we also believe that there is a role for
alternative electoral dispute resolution mechanisms and we should invest a lot more in such mechanisms or institutions that hold a genuine potential for providing such services. We look forward to working with each and every one of you as well other election stakeholders in strengthening the administration of electoral justice in Sierra Leone. A lot has been achieved over the past few years, but significant challenges persist. We can and must collectively help resolve them,” Ibrahim Tommy concluded.

Presenting the report to the Chief Justice of Judiciary of Sierra Leone, the Iris Ambassador, Madam Claire Buckley, commended the Judiciary of Sierra Leone for the tremendous progress in improving access to justice for Sierra Leoneans across the country, especially for women and girls and also note the efforts that are already underway and those that are foreseen which are aimed at strengthening the administration of electoral justice in the current electoral cycle which include the establishment of electoral courts, training of judges and the development and review of rules of court for elections.

She informed the Hon. Chief Justice, that Ireland believes that open and democratic political systems and inclusive societies that respect human rights are important for good governance, economic growth and long-term stability, adding that electoral justice and election-related disputes have become a major area for democracies like Sierra Leone.

“As developments over the years have shown, mutual security among political competitors is easier when they have faith in impartial, independent courts, police and the broader justice sectors. In line with international and national frameworks, an effective electoral justice system also guarantees broader protection of a number of fundamental freedoms like opinion and expression, freedom of assembly, gender equality, transparency, and right to information,” she maintained.

Madam Claire Buckley further commended the Centre for Accountability and Rule of Law (CARL), for their work, which Ireland was pleased to support, pointing out that as CARL had already stated, the report broadly assesses the legal and structural environment for the effective administration of electoral justice in and outside the courts.

“It is our hope that this work will support ongoing work
of the justice sector to strengthen the existing electoral justice systems
that resolves electoral contestations in and outside the courts.
On this note, Hon. Chief Justice, and all stakeholders present, I am
pleased to present this report by CARL: “A Review of the Administration of Electoral Justice in Sierra Leone: Challenges and Opportunities for Reforms”, as part of Ireland’s contribution to the work of the justice sector
in ensuring an effective, impartial and independent electoral justice
mechanism before, during and after the 2023 general elections,” the Iris Ambassador concluded.

Receiving the report, the Honorable Chief Justice Desmond B. Edwards commended CARL-SL for such a laudable venture in putting together the report and that they will look into it and “what can be done will definitely be done” in enhancing public trust in the Judiciary of Sierra Leone especially during elections.

He said that the Judiciary of Sierra Leone is very pleased to receive the report.

The Honorable Chief Justice said that as part of the reforms the Judiciary now has the Electoral Petition Rules 2022 and the Public Elections Acts 2022 with a host of other reforms.

He said that they are going to delve into the report in order to see areas where they will need to do reforms. He assured all that the Judiciary will perform well to the expectation of all.

The report was officially presented to the Honorable Chief Justice Desmond B. Edwards by the Iris Ambassador, Madam Claire Buckley.