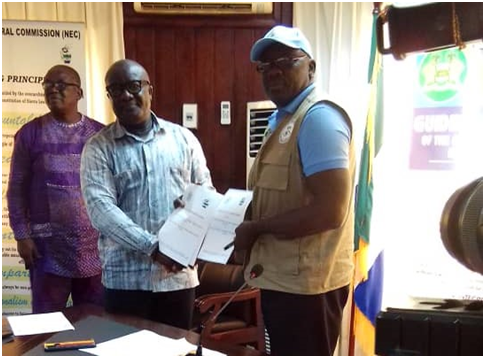 With the aim of working to together in promoting mutual collaboration and partnership in the areas of Governance, Human Rights, Inclusion, Civic, and Electoral Education and Observation of Elections in the country, the Electoral Commission for Sierra Leone (ECSL) has on Thursday 10th November 2022 signed a Memorandum of Understanding (MoU) with the Elections Observer Network Sierra Leone (EON-SL). The Signing ceremony which was held at the Electoral Commission Sierra Leone Conference Hall on Tower Hill in Freetown will serve as a manifestation of the commitments of both institutions to achieve their shared objectives in observing the 2023 elections in the country.

He pointed out that accommodating other partners like the Elections Observer Network Sierra Leone (EON-SL) and other organizations will help the commission to achieve its mandate to conduct free and fair elections acceptable by all.

Mohamed K. Konneh said that over the years Electoral Commissions for Sierra Leone were charged with the responsibility of conducting elections in the country in a free and fair manner, adding that after every electoral cycle many players are coming on board to be associated with the successes of the commission.

He pointed out that whatever successes they have achieved over the years is largely due to the participation and contributions or various organizations in their various capacities in order to ensure that Sierra Leone continues to build on its democratic credentials.

On his part, the National Coordinator of Elections Observer Network Sierra Leone (EON-SL), William Tucker commended the Electoral Commission of Sierra Leone for partnering with them of which he assured of their fullest support to the work of the commission.

He said that EON-SL is a non-profit and non-partisan conglomerate of organizations that advocate for peaceful coexistence, good governance, and respect for democratic processes as a Consortium, adding that the mission of EON-SL is to work in partner-ship with organisations in Sierra Leone to support electoral processes in the country, with a vision of creating a democratic society where transparent and credible election exist for the furtherance of Good governance and Democracy.

William Tucker maintained that the objectives of the Elections Observer Network is to help promote Electoral Peace by observing not only polling day activities, but the entire electoral processes such as election education and campaigning and messaging, Collaborate in electoral activities undertaken by ECSL; Engage central and local government institutions, organizations, development partners and other Stakeholders for the implementation of the objectives of the Consortium.

The National Coordinator maintained that EON-SL is very committed towards supporting the commission for the conduct of free, fair and transparent elections in the country.

He used the opportunity to inform the gathering that the Elections Observer Network Sierra Leone (EON-SL) will be officially launched on Thursday 17th November, 2022 at the New City Hall in Freetown of which he extended invitation to organizations present at the ceremony to join them in their launching ceremony. 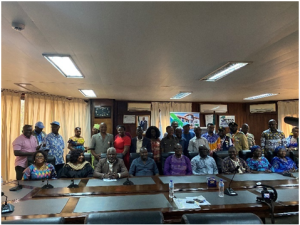