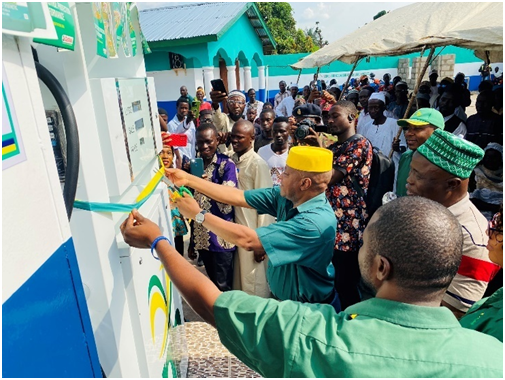 As part of its continuous efforts in taking the lead in the downstream sector by ensuring that its petroleum products are accessible across the country, even within remote communities, NP-Sierra Leone Limited (NP-SL Ltd) has on Friday 11th November 2022 commissioned a new Filling Station in Gbalamuya, Kambia District, Northern Sierra Leone.

The Proprietor of the Filling Station, Alhaji Momoh Bangura, extended gratitude to the community stakeholders for their support since the start of the project on to its completion.

He added that, at present, it has created job opportunities for residents of Gbalamuya in Kambia District and beyond noting that the station will also address the problem of fuel crisis within the locality, furthering that there had been constraints in securing fuel especially in times of crisis and that with the commissioning of this Filling Station in Gbalamuya such will reduce those constraints.

On his part, the General Manager of the NP-Sierra Leone Limited, (NP SL-Ltd), Saidu Mansaray, assured residents of Gbalamuya, Kambia District that with the new NP-SL Filling Station the issue of fuel shortage will become a thing of the past, adding that the commissioning of the new Filling Station means growth and increasing sales for the company.

He reiterated that the new Filling Station will not only make fuel available for them at all times but has also provide job opportunities for some residents as well, of which he said the company believes in empowering local entrepreneurs to thrive in business ventures who will then in turn contribute meaningfully to nation building.

Saidu Mansaray called on other descendants of the district to emulate the footprint of the Proprietor and further encouraged residents to take ownership of the new Filling Station by patronizing with it.

Ibrahim Kamara, a bike Rider of Gbalamuya expressed appreciation to NP-SL for commissioning the Filling Station , noting that as` bike riders they have been faced with a lot of constraints in securing fuel furthering that they had to go to nearby villages to secure fuel but said with this new NP-SL Filling Station in Gbalamuya it will surely address those fuel constraints in that part of the country.

The event was climaxed by the official unveiling of the new Filling Station by the Proprietor, the Chief Executive Officer of NP-Sierra Leone Limited, (NP SL-Ltd), Kobi Walker, the General Manager, Saidu Mansaray, the Proprietor of the filling station, Alhaji Momoh Bangura and representatives from the community. 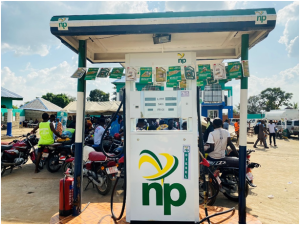 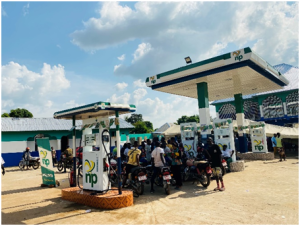