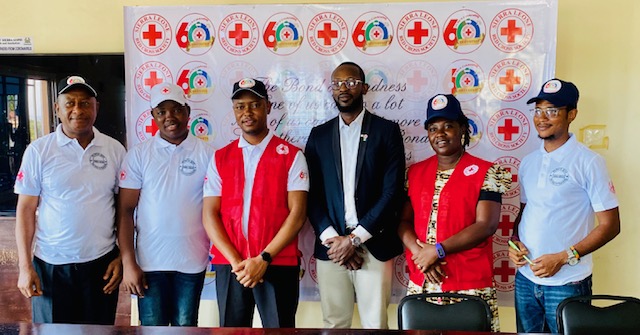 During a press conference held on Friday 6th May, 2022 at the Sierra Leone Red Cross Society Office on Wilkinson Road in Freetown, the Secretary-General of the Sierra Leone Red Cross Society ,Kpawuru Sandy, informed pressmen that as part of their 60 years celebration the society is poised to raise the sum of one billion Leones to address emergency and disaster relief efforts to help the country make a remarkable difference in the lives of those in need.

He revealed that through its 18,000 volunteers across the country, the Society continues to play a pivotal role in promoting safe and sustainable blood donation awareness to citizens through engagement of stakeholders and sensitizing communities about the benefits of giving out blood to those in need of it furthering how they have also served as the longest non-remunerated blood donors nationwide.

The Secretary General disclosed that the Sierra Leone Red Cross Society traces its beginnings to an influenza pandemic (also called the ‘Spanish flu’) that gripped the world in 1918. Sierra Leone was badly affected by this plague, which killed many Sierra Leoneans and that a group of women (mostly the wives of British colonial administrators in Freetown) formed a social welfare organization to assist those affected by the influenza.

“Established by an Act of Parliament in 1962 a year after Sierra Leone gained its independence from the British Government in 1961 under regime of the former Prime Minister Sir Milton Margai; SLRCS has remained true to its vision, mission, and mandate by continuing to build a resilient National Society that delivers quality and sustainable humanitarian assistance to the vulnerable. In the process of alleviating suffering and restoring human dignity, and since it became a full member of the RCRC Movement in November 1962, SLRCS has been consistently operating in alignment with the Movement’s fundamental principles and values,” he also stated.

Kpawuru Sandy maintained that SLRCS also intensified the expanded sensitization programme on the control and prevention of Lassa Fever endemic in the eastern province of Sierra Leone; Kenema, Kono and Kailahun districts. In collaboration with the MoH and medical emergency relief international, volunteers and first aiders reached approximately 9,000 households and community members through education activities focusing on the prevention of lassa fever.

He continued that in 2014 – 2016, the country faced the deadly Ebola virus resulting to the loss of thousands of lives. With proven efficiency and effectiveness in responding to emergencies, SLRCS worked tirelessly with the Government in providing safe and dignified burials, sensitization and awareness raising within communities across the country thereby building trust amongst community residents and vulnerable people.

The Secretary General stated that the Society also played a crucial role during the mudslide in 2017 that claimed the lives of over 480 citizens and living many homeless being first on site, the volunteers conducted search and rescue, first aid and psychosocial support, safe and dignified burials and distribution of food and non-food items.

Furthering that also, in 2020 when the dreadful Corona hit Sierra Leone, it raised lots of misconceptions, myths, and distrust around the virus which brought about major panic in the country. Because of the established trust of community member towards the NS, it was much easier for volunteers to penetrate hard-to-reach places on sensitizations and awareness raising activities.  The national society was instrumental in disseminating lifeline information through radio and television talk shows, and on social media platforms.

Kpawuru Sandy concluded by asking individuals and organizations to show their support for the organization’s emergencies and disaster relief efforts to help the country and make a remarkable difference in the lives of those in need.