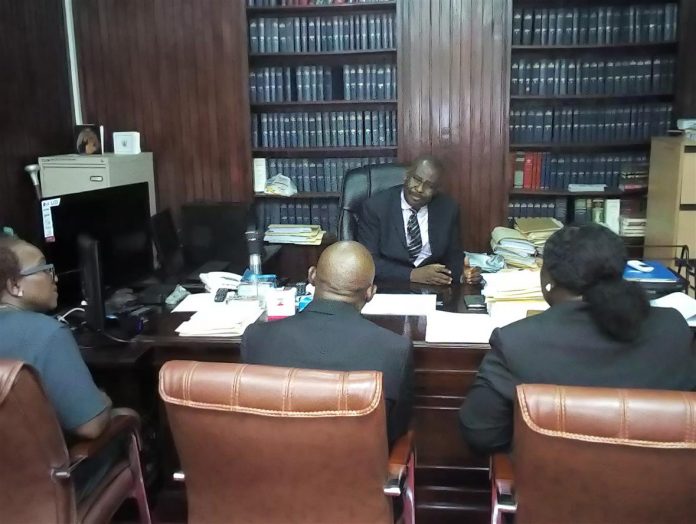 The Chief Justice of the Republic of Sierra Leone, Justice Babatude Edwards has welcomed the ongoing nationwide assessment by the legal Aid Board of sentences imposed on inmates in correctional centers from various Magistrate Courts around the country.

This follows a meeting in the Chamber of Chief Justice on Tuesday, 26 February 2019 in which the Executive Director of the Legal Aid Board, Ms. Fatmata Claire Carlton-Hanciles provided updates on the assessment which also covers inmates who have been remanded for long periods without indictment with a view to filing an application of Habeas Corpus to secure their release.

The initial assessment in the Correctional Centers in Freetown has uncovered that some inmates have been given wrong sentences, some for periods well above the jurisdiction of Magistrate Courts. For instance, a ten year prison term was imposed on an inmate convicted of larceny. Two others were sent to prison terms of thirteen and seven years for Obtaining Money by False Pretense and Malicious Damage respectively. Another, inmate was sentenced for seven years for fraudulent conversion even though the materials he was given to sew were valued at seven hundred and fifty thousand leones (US 87).

The Board also found that no prosecution witness testified in some of these trials at the Magistrate Court. In these cases only police officers or experts (formal witnesses) testified in the trials. For others, the witnesses for the complainant were not present at the material time when the incident took place.

Also, there were cases in which preliminary investigations at Magistrate courts were converted into summary trial and long sentences were handed out. These are sentences which could only be handed out for indicted offences (serious or felonious offences) in the high Court.

The Chief Justices informed the Legal Aid Board that a team comprising Justices Monfred Sesay, Sengu Koroma and Alusine essay has already been constituted to review the sentences. The Team is expected to commence work soon.

In response, Ms. Carlton-Hanciles said the Board will represent all inmates whose sentence will be reviewed. ‘This is really a welcome relief for the administration of justice in Sierra Leone,’ she said, adding: ‘The Chief Justice is showing leadership in holding the balance in the area of Justice.’