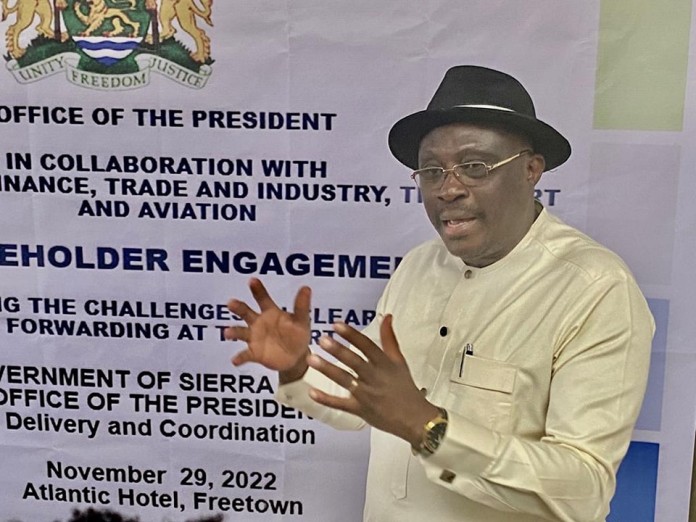 The Chief Minister, Jacob Jusu Saffa, has on the 29th November 2022 engaged stakeholders in the clearing and forwarding sector to explore more robust ways of reviving the clearing processes at Queen Elizabeth II Quay and ensuring efficiency in Government.

A build-up to the stakeholder engagement started with a consultation among key players in the sector on 9th November 2022, which was spearheaded by the Office of the Chief Minister and the Ministries of Finance, Trade, Transport and Aviation and private sector players. During those meetings, a term of reference was developed that led to the stakeholder meeting.

The Chief Minister noted: “We are here to look at one of the perennial problems in Sierra Leone, the clearing and forwarding sector. It is no news that there have been challenges and there will continue to be challenged. We are also here to discuss the clearing and forwarding process with a view to streamlining and simplifying the processes at the port by identifying the challenges in the sector.

“President Bio is looking forward to this stakeholder engagement and to see that we are able to solicit inputs from all sector players on their roles and responsibilities as well as conduct a general review of the entire clearing process in the country.”

He noted that part of the process was, therefore, to look at and assess existing laws that might be considered obstacles to the operations of the sector, adding that the engagement was to also ensure that there was ease of doing business in the sector.

“We need to ensure that we are able to generate more revenue for the Government and to also address some of the bottlenecks around the clearing that recently led to an overnight increase in the cost of commodities as a result of charges resulting from the cost of clearing goods at the quay,” he concluded.

Minister of Finance, Dr. Dennis Vandi, urged for a mechanism to be in place that would have a single player lead the process of clearing and forwarding in the country.

“The absence of a leadership role has resulted in shipping lines allowing goods to be delayed due to either deliberate fault of the clearing agency or on the part of the customers,” he said and called on the stakeholders to urgently look into issues of clearing agencies by addressing all obstacles leading to delays and loss of revenue.

Stakeholders present at the meeting identified as challenges, among other things, the incorrect declaration of clearance documents, falsification of clearance documents, absence of a clear service delivery charter by the respective agencies, improper examination procedures by customers, duplication of roles, lack of coordination between port authorities and customs and overcrowded examination processes.

The outcomes of their deliberations will be presented to His Excellency, President Dr. Julius Maada Bio, for decision in the next cabinet meeting.