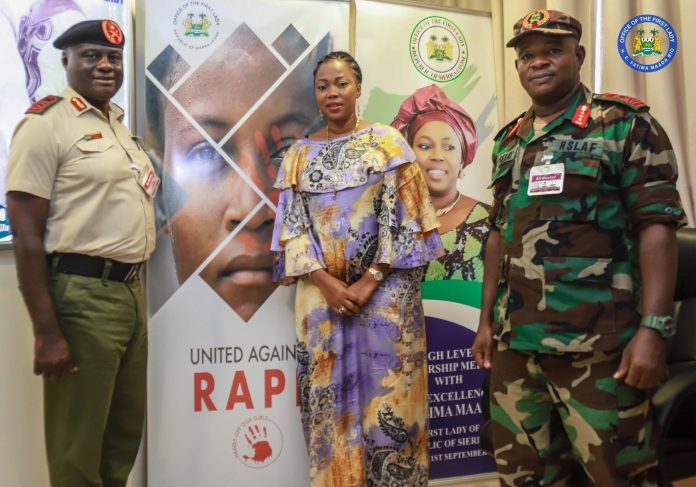 During a courtesy call paid by the Chief of Defence Staff (CDS) of the Republic of Sierra Leone, Major General Sullay Ibrahim Sesay to the First Lady of the State, Madam Fatima Bio, on the 22nd  July 2020, he  intimated her that the Army is responsible for the territorial security of Sierra Leone’s borders and defending the national interest of the country within the framework of its international obligations.

He said on that note the Army has the mandate to protect women and girls and that is the reason why they are declaring their support for the Hands Off Our Girls initiative.

Major General Sullay Ibrahim Sesay revealed how they are now putting logistics in place to work with the Office of the First Lady to combat the rape scourge. He reiterated that the military will play an active role in protecting children.

He told the First Lady that special sensitization initiatives in conjunction with the #HandsOffOurGirls (HOOG) campaign will be rolled out in all barracks adding how the Office of the First Lady is key, because  the  HOOG initiative is currently the de facto umbrella body for the fight to protect  girls.

The meeting came after H. E. Fatima Maada Bio had a discourse with Executive Members of the Armed Forces Cooperative Society and the Police Wives Association.

The CDS said Synergy plays an important role as everyone must be involved.

It could be recalled that in February 2019, His Excellency President Julius Maada Bio declared a State of Emergency over Sexual and Gender Based Violence (SGBV) in response to the increasing rape cases in the country. The state of emergency heightened public awareness about the issue and accelerated the amendment of the Sexual Offences Act (2012).

The new legislation increased the minimum sentence for rape from 5 years to 15 years for adults (with a maximum of life imprisonment) and can potentially allow cases to go directly to the High Court without the need for a preliminary investigation at the Magistrate Court.

The Office of the First Lady, as champion of the Hands Off Our Girls initiative, has mobilized all 16 districts of the country to promote and protect the rights of all girls against sexual violence.