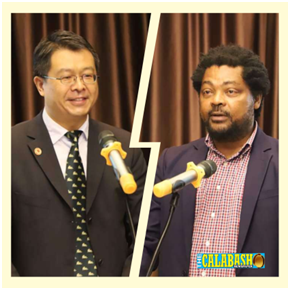 Chargé d’affaires ad Interim of the Chinese Embassy succinctly informed that audience that the 20th CPC National Congress is an important meeting held at a critical moment when China, the world’s most populous and largest developing country, is embarking on a new journey to build a comprehensive socialist modern country. It will also have a positive impact on the world against the background of the current international situation full of instability and uncertainty and the serious challenges to global peace and development.

In highlighting the significance about the Congress he said the Congress summarized China’s past achievements maintaining that in the past decade, China has experienced three major events: first, the 100th anniversary of the founding of the Communist Party of China, second, socialism with Chinese characteristics entering a new era, and third, the completion of the historical task of eradicating poverty, and achieving its first centenary goal — building a moderately prosperous society in all respects.

He continued that with the implementation of the new development concept, nearly 100 million rural poor people have been lifted out of poverty and China’s economy now accounts for 18.5% of the world economy, ranking second in the world.

Chargé d’affaires ad Interim furthered that the Congress clarified China’s future tasks. He said in doing so China will adhere to the leadership of the CPC, promote the great rejuvenation of the Chinese nation with Chinese modernization in a comprehensive manner, build a strong socialist modern country and achieve the second centenary goal which will build the country into a great modern socialist country that is prosperous, strong, democratic, culturally advanced, harmonious, and beautiful in the middle of the century.

He also revealed how the Congress pointed out the way forward underscoring that China will never seek hegemony or engages in expansionism.

“China stands firmly against all forms of hegemonism and power politics, the Cold War mentality, interference in other countries’ internal affairs, and double standards,” he pointed out adding that China remains firm in pursuing an independent foreign policy of peace.

He said it has always decided its position and policy on issues based on their own merits, and has strived to uphold the basic norms governing international relations and safeguard international fairness and justice.

According to him, the Congress also injected confidence and momentum into the world adding that the fact that President Xi Jinping continues to serve as General Secretary of the CPC Central Committee reflects the collective will of the world’s largest ruling party with more than 96 million members and 1.4 billion Chinese people, and provides a solid guarantee for the huge ship of China to cut through the waves and make steady progress.

While summarizing the latest development of China-Sierra Leone cooperation, Mr. Li assured the participants that, under the great leadership of CPC, China and Sierra Leone will continue to treat each other with sincerity and mutual trust, work hand in glove for common development, and support each other in good faith.

On his part, the President of SLAJ, Ahmed Sahid Nasralla, congratulated China on the successful convening of the CPC Congress, in particular on President Xi Jinping’s reelection as the General Secretary  of the CPC Central Committee. He commended the CPC for leading the Chinese people achieving miracles in their nation building which have positively affected the world.

He said the election of Xi Jinping as General Secretary is a demonstration of confidence by the CPC party and the Chinese people of all ethnic groups that his leadership will continue to deliver on the collective aspiration of China.

The SLAJ President disclosed that Xi Jinping’s report to the Congress titled:“Hold High the Great Banner of Socialism with Chinese Characteristics and Strive in Unity to Build a Modern Socialist Country in All Respects” re-emphasises the need for China to continue to practice a political system that suits the context of China and the diversity of the Chinese people.

He noted that the report highlights 15 building blocks that will consolidate the strong foundation upon which China will continue to grow as a great nation, and from which, he believes, other ambitious nations could borrow a leaf.

Ahmed Sahid Nasralla informed that key among these blocks are:

Pursuing Science and Education to develop a strong workforce for the Modernization Drive, Advancing people-based democracy to run the country, Applying the Rule of Law: exercising Law-based governance, Improving the People’s Wellbeing and Raising Quality of Life, Upholding the policy of One Country, and promoting national unity, Contributing to World Peace and Development, Respect for the environment by pursuing Green Development and Promoting Harmony between Humanity and Nature underscoring that he loves the quote: “We have acted on the idea that lucid waters and lush mountains are invaluable assets.”   He lamented at what certain persons are doing to the country’s (Sierra Leone) hills, mountains and ocean.

He further revealed that what he loves most in Xi Jinping’s address to the Congress was where he stressed the need for the CPC to cultivate officials capable of shouldering the mission of national rejuvenation, enhance the political and organizational functions of Party organizations, take strict steps to improve Party conduct and enforce Party discipline, and win the tough and protracted battle against corruption.

He expressed optimism that as Xi Jinping continues as leader there is hope to see the cooperation and ties between China and Africa, and particularly Sierra Leone further strengthened.

He added that FOCAC should continue to be an important and dynamic platform for China and Africa to carry out collective dialogue as well as an effective mechanism for practical cooperation on the economic and political fronts, while the CAMC platform continues to facilitate extensive and in-depth cooperation in the field of media exchanges.

For Sierra Leone in particular, he stated, China-Sierra Leone cooperation last year celebrated 50 years of friendship saying the relationship has grown from strength to strength and it has been one of mutual understanding, respect and benefit.

“China’s bilateral support to Sierra Leone can be seen in the many infrastructural landmarks across the country; from roads to public office buildings, health, agriculture and mining sectors; during Ebola and now COVID-19, etc,” he intimated.

He pointed out how the media has also benefitted as journalists have benefitted (and continue to benefit) from study scholarships to China, short term courses and visitations.

“SLAJ and its affiliate bodies have also received logistical support from the Chinese Embassy in the form of office and media equipment,” he said with gratitude.

Nasralla concluded by thanking the Chinese Embassy for initiating the information salon platform which, according to him, is now serving as a meeting point between the Embassy and the media and CSOs to share information, promote cooperation and strengthen ties.

He once more congratulated the CPC party for a successful Congress, and wished them well in pursuing their aspirations of the next decade.

The 5th Chinese Embassy Information Salon climaxed with an interactive session taking the form of questions and answers as well as clarifications on issues related to the 20th CPC Congress.

Xi Jinping on Sharing China’s Development Opportunities with the World

AU Ambassador Appreciates China’s Support for G20 Membership, as African Voice Should Not Be Sidelined