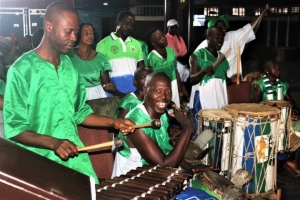 The House of Representatives recently hosted a crop of new visitors. Sierra Leoneans from all walks of life including farmers, pupils, persons with disabilities, the aged, civil societies, and the media were given unhindered access to Parliament where they were recently able to observe and speak with Members of Parliament (MPs).

A first in history, the three-days Parliament ‘Open Day’ held on the 9th –11th December 2019 was like none that had given citizen access to the Sierra Leone House of Parliament. Citizens were exempted from the usual protocols experienced when visiting Parliament.

Widely, an all-embracing interaction between the citizenry and Members of Parliament followed speeches delivered during the first day and there was excitement as citizens shook hands and interacted with their leaders, the MPs, and all staff of Parliament. Citizens however showed more interest in asking questions about MPs duties in light of strengthening democracy in Sierra Leone.

Consistent with Goal 4 of the Strategic Plan of the Sierra Leone Parliament; making Parliament open, accessible, representative, inclusive, transparent and accountable to the citizens of Sierra Leone, the Open Day aimed to increase public awareness and understanding of its work; to enhance citizens understanding of the constitutional role of the MPs; to heighten public trust and confidence in Parliament; and to make Parliament accessible, participatory and above all responsive to the interests of the citizenry.

‘Mock Parliament, how laws are made’

One the second day of the Parliament Open Day, the Sierra Leone Parliament was summoned by key stakeholders to serve as the legislative branch of Government where the voices and interests of citizens were expressed and addressed through debate on public policy matter. This session focused on emerging issues from voices of the most affected by government policies and law- making process.

As the event unfolded, another strategic session was held in the well of parliament. Citizens were given the opportunity to act as MPs after they had been enlightened on law making processes and the parliamentary standing orders. A bill was read by the clerk of parliament for a debate. A nine-year old girl was one of the simulated MPs who acted as an opposition member in the well.

Also, a partnership engagement framework session between Parliament of Sierra Leone through the Parliamentary Research Unit and research institutions, Think-Tanks, Civil Society Organizations and Development Partners was held to establish a collaborative relationship that utilizes various platforms through which MPs will be supported with relevant research information that will inform their legislative and general decision making procedures in the House of Parliament.

The affirmations prescribed in the constitution of Sierra Leone, the Fifth Parliament of the Second Republic poised to maintain three key constitutional responsibilities which are Representation, Law Making and Oversight.

The Constitution of Sierra Leone (Act No. 6 of 1991) vests supreme legislative power in the Parliament; it has the supremacy over the enactment of laws; it is empowered to amend existing laws, ratify conventions, agreements and protocol; promote public accountability and transparency and monitors post-legislative implementation of laws. In this respect, the Fifth Parliament has recently amended the Sexual Offences Act of 2012 and the Finance Act of 2020. Whilst in its oversight responsibilities over the executive branch, parliament has performed remarkably in its Seven Standing Committees listed in Section 93 of the constitution.

The UNDP and other Development Partners have vowed to continually give their support to the Sierra Leone Parliament to honour all democratic forces for the maintenance of inclusive and good democratic governance. Parliament should devoid of any political machinated effort and work towards strengthening our democracy. The citizenry expects a parliament that is virtually representative and inclusive.
The Open Day was supported by UNDP and UN family, European Union, DFID, WFP, Ministry of Tourism, Africell and Orange mobile companies