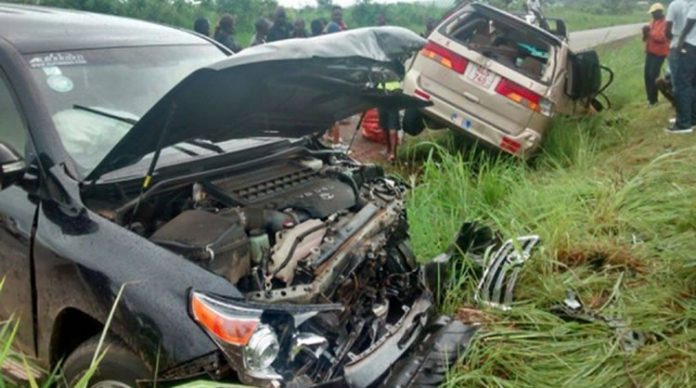 Two Sundays ago, one of Sierra Leone’s most illustrious distinguished clergymen, Bishop Yambasu lost his life in a road accident along the Jui-Allen Town highway.

On Thursday evening, another gruesome accident involving two Mercedes Benz Sprinter poda-podas and a taxi that was crushed like a tin took place close to the Orugu Bridge coming from the Allen Town end.

Over the immediate past years, several gruesome accidents have taken place along that stretch of the highway, which raises the question: what must be done by road authorities as well as drivers to prevent more such occurrences?

Accidents are a great concern to the public in all 14 Districts of Sierra Leone. Transportation in Sierra Leone occur in three forms, land, marine, and air, all of which (save air) have recorded an alarming rate of accidents over the past few years. Traffic accidents result in life and financial loss to the society. In Sierra Leone, traffic fatalities are comparable to other leading causes of unnatural death. The need for the analysis of the spatial distribution of traffic accidents, as an aid to select the most appropriate type of accident reduction programme (e.g. site, route and area plans) and assessing the effectiveness of such plans after implementation, is very important.

There is no systemic method of recording accident disasters in Sierra Leone. However, accident (road, maritime, aviation) disasters have been sourced from the DesInventar – a global Disaster Information Management System database that systematically collects documents and analyses data about losses caused by disasters. Between 2006 and 2015, over 150 accidents were recorded, with over 40% of them occurring in Western Area Urban (Freetown) alone. A total of 418 traffic accident-related fatalities were recorded during that time, with a national fatality-to-event ratio of 2.4 (see table below). There’s anecdotal evidence that these figures can be construed as grossly underestimated given that not all accidents are reported and recorded in the country.

Other than that, if one were to make a deduction out of expert and technical analysis, many road accidents are caused by human factors and technical malfunctioning of the organs of the automobile. Therefore, it can be predictable and to a very large extent preventable.

In Sierra Leone, the engineering and infrastructure of roads including many more have added to the high rate of accidents on our roads.

In the first instance, absence of standards and regulations for vehicle importation into the country means undesired relics from Europe, Asia and America keep on flooding the country unabated.

Some cars plying the streets are simply road unworthy because they have worn out.

Apart from the hazardous fumes volleyed in the air, the vehicles pose a high fatal risk to pedestrians and co-vehicle users.

The traffic police are mandated to ensuring the protection of life and property on the roads whilst the role of the road safety corps/ traffic wardens is to identify road traffic misdemeanors.

The two institutions are doing almost the same job and hence cannot handle or manage the plethora of traffic offences on the roads.

Many vehicle owners and members of the general public have noted that the two institutions are a burden to the citizenry, especially motorists.

Extortion of monies and unnecessary court cases that are sometimes not necessary has been the order of the day.

Flash light reflectors that are absent in many vehicles have safety value because they alert an incoming traffic of a stationary car.

Vehicles using the same route can inadvertently crash into a static truck; the resulting episode would be a decapitated and dismembered scene of scattered human body parts.

According to Dr. Orwizz Koroma, the country`s only Pathologist at the Connaught Hospital Mortuary, “instead of decreasing, road accidents are becoming commonplace with over 200 deaths every year involving pedestrians, passengers and drivers.”

Lack of upgrading and expansi oning of the roads to accommodate escalating traffic as well as inadequate street lightening resulting in poor visibility have caused many road crashes.

There are also poor road signs. Even in places where they are visible, they are largely incomprehensible to many illiterate people who never attended a driving school, but only becoming drivers after graduating as an apprentice.

Despite its resource challenges, the SLRSA must be in a position to establish national driving schools where drivers can be trained on road safety etiquettes, certified and later released to ply vehicles on the roads.

Another notable cause of road accidents is the human factor such as fatigue, insomnia and divided attention, drink driving, over speeding, overloading and mobile usage.

Abdul Karim Dumbuya, Public Relations Officer of SLRSA said reckless driving on slippery roads are the major causes of accidents that occurred in the month of September 2019.

Many drivers lack personal responsibility as they hardly undertake routine vehicle safety checks before venturing out on the highways.

But Abdul Karim Dumbuya, PRO of SLRSA, has a different view, “if a malfunctioning vehicle part is replaced by a substandard one, the danger is still not eradicated”

Now that the man power of the Road Safety Corps have been bolstered by the recent graduation of about 149 officers, instead of concentrating these new officers at `money-spinning` junctions in Freetown, mobility logistics must be furnished to these corps to accelerate highway patrols in a bid to prevent potential accidents.

Whenever a breach or a road safety default is detected, the official is compromised by surreptitiously demanding for the offenders licenses.

The Authority has signed a Memorandum of Understanding with over 20 radio stations across the country and it has further increased its outreach activities to lorry parks, market places and educational institutions.

However, the scaling up of road safety education is yet to have a direct impact on the reduction of road accidents.

Apart from strengthening institutional capabilities, the success of the SLRSA is tied to the effective inter-agency collaboration with other like-minded institutions such as Sierra Leone Roads Authority (SLRA), Sierra Leone Road Transport Corporation (SLRTC), Local Governments and the Office of National Security.

Interest groups such as commercial bike riders, tricycle unions, the national drivers and general transport workers union, traders union and market women’s association must be incorporated in the fight.